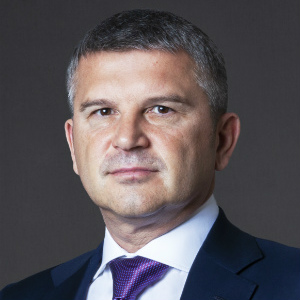 In 1993 he graduated from the Alma-Ata Higher Frontier Command School named after F.E. Dzerzhinsky. In 2000 - Kaliningrad State University with a degree in “Jurisprudence”. In 2004 - the North-West Academy of Public Administration with a degree in “State and Municipal Management”.

From 2005 to 2006, he served as Chairman of the Management Board (General Director) of “European Industrial Group” LLC.

In 2009, he was elected to the district council of deputies of the city of Kaliningrad from constituency No. 1 (part of the Moscow district and the Pribrezhniy settlement).

From 2010 to 2011 - Deputy Head of the North-West Directorate of the Federal Service for Environmental, Technological and Nuclear Supervision (Rostekhnadzor) for the Kaliningrad region.

2011-2012 - Acting General Director of “Plant ZHBI-1st” LLC. From 2011 - Chairman of the Board of Directors of “European Industrial Group” LLC (electric power industry, production of building materials, industrial and civil construction).

Since 19 September 2018 - Chairman of the Board of Directors of JSC “Yantarenergo”.

— Order of the Russian Orthodox Church of the Holy Blessed Prince Daniel of Moscow, degree III

— Medal “For merit to the Kaliningrad region”

— Letter of Gratitude of PJSC ROSSETI

— Honorary Badge of PJSC ROSSETI “For contribution to the development of the electric grid complex”, degree II

— Medal of EMERCOM of Russia “85th Anniversary of Civil Defense”

— Letter of Thanks from the President of the Russian Federation

— Certificate of Merit of the Republic of Dagestan