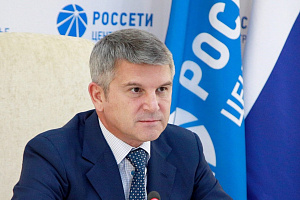 What needs to be done to ensure the uninterrupted operation of power grids in the regions bordering Ukraine? Do you often have to repair electrical facilities due to shelling? And how to support employees working in such conditions? These questions were answered by Igor Makovskiy, General Director of Rosseti Centre, PJSC - the managing organization of Rosseti Centre and Volga region, PJSC, to Dmitry Drize at the SPIEF.

— Your company is not located in a simple region now, in the border region. Is there any threat emanating from the territory of a neighbouring state? And are measures being taken in this regard?

— The length of the border of the four constituent entities of the Russian Federation, which are included in our service area, is almost 1,300 km. And in this border area, we have 26 primary divisions, Distribution Zones, more than 2.5 thousand employees. And the power supply of 720 thousand inhabitants of the country depends on the quality of their work. On 24 February, by its decision, Rosseti Centre introduced a high alert mode in four branches.

— What does this mean?

— This is a round-the-clock duty of all crews, constant readiness to leave within 10 minutes for any events and eliminate a fault in a power line. Four subjects: the Kursk, Bryansk, Voronezh and Belgorod regions. In fact, from the same time, an operational headquarters began to work under my leadership. We made a number of decisions that were aimed at ensuring the safe work of our employees, based on the new environment in which we had to and still have to work.

First of all, we have increased the level of interaction with the operational headquarters in the regions, municipalities, with the territorial bodies of the FSB, the Ministry of Internal Affairs, the Ministry of Emergency Situations, and the National Guard. We have cancelled all scheduled work in the border area, which is currently 15 km from the border with Ukraine. In addition, we provided and distributed special armoured vehicles. Our Belgorod, Kursk branches and first responding mobile crews still use them. They separately supplied gear - bulletproof vests, overalls, protective helmets. They restricted entry and strengthened the access control, put up guards in the person of active employees of the Russian Guard with full ammunition, with full weapons. We have also taken a number of measures with regard to our grid facilities, on which the energy supply depends, including categorized consumers in the area.

— The most important question: are your facilities under shelling?

— Unfortunately. We have had shelling regularly since the very beginning of the special military operation. We monitor the operational situation and record such incidents. To date, there are 109 of them, they are associated with fire impact, including on energy grids.

— That is, they aim at the facilities?

— Various incidents occur. There are accidental, there are special ones, including acts of sabotage that have already taken place. We promptly leave, often we arrive one of the first or together with colleagues from the National Guard, the Ministry of Emergency Situations, and administrative authorities.

— Are there power outages? Do you have to adjust your production programs?

— These are the new conditions in which we work, and, of course, the programs and plans that we built for 2022 did not take into account these new events. But all those measures that affect the reliability of energy supply, including during the heating season, for which we are preparing, we, of course, carry out. Therefore, I can say with confidence that we will pass this heating season in these conditions without failures in all four regions.

— How do you provide social support for employees who work in such difficult conditions?

— The overall reliability of the operation of the power grid complex depends on the morale, fighting spirit, mood of the employees of our Distribution Zones. One of the main factors here is to guarantee the full protection of our employees, no matter what circumstances overtake them. We have made a decision and, in addition to wages, we pay 10 thousand rubles to all employees who work in special conditions after taxes. The second thing we did was to equate the calculation of the length of service of workers from the 1:2 formula. Each day worked equals two. This is important because we also have an obligation under the collective agreement to pay for work experience. And third, and not least, in the event of injury or death of our employees in the performance of official duties in the border areas, the company will pay the family 3 million rubles for the injury and 5 million rubles in the event of the death of our employee. In fact, today the status of an electrician is equated to the status of a military man. I think it’s important. And today it allows including keeping the level of morale at a quite high level.