Rosseti Centre and Rosseti Centre and Volga Region completed all preparatory activities in full and in strict accordance with the deadlines. Over 45 thousand kilometres of 0.4-110 kV power lines and more than 12 thousand transformer substations of 10/0.4 kV were repaired. They repaired 71 power transformers at 35-110 kV substations. More than 30 thousand hectares of routes of overhead power lines were cleared.

More than 11.8 thousand trainings were conducted with operating personnel, including more than 20 joint complex exercises with regional departments of the Ministry of Emergencies of Russia and local authorities.

3,905 crews, consisting of 13,029 people, 4,515 automotive and specialized vehicles, are ready to eliminate failures and emergency situations in branches of Rosseti Centre and Rosseti Centre and Volga Region. The power engineers have at their disposal more than two thousand reserve power supply sources with a total capacity of more than 60 MW, which can be used for temporary power supply, primarily to socially significant facilities in the regions.

Of the highly qualified workers who received additional training, 171 emergency recovery crews of increased mobility were formed, consisting of more than a thousand people and over 400 vehicles, being ready at any time to move forward to eliminate emergencies in any region of Russia. 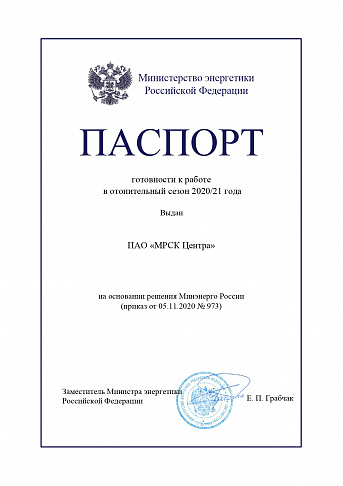