"Yarenergo": the amount of scheduled work to prepare for the winter rose by 7% 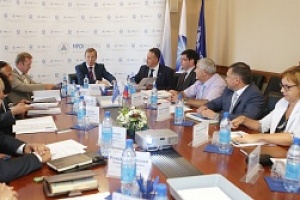 First Deputy General Director for Technical Policy of JSC "Russian Grids" Roman Berdnikov held a meeting with heads of departments of IDGC of Centre - Yarenergo division. The main item on the agenda was to discuss the preparation of the electric grid complex of the Yaroslavl region for the autumn-winter operation period of 2014-2015 for the purpose of study and analysis of "bottlenecks".

Together with First Deputy the meeting was attended by leaders of the parent company responsible for innovation, electric energy metering and production assets management. The subsidiary – IDGC of Centre – was represented by Chief Engineer Alexander Pilyugin and Head of Grid Connection Department Eduard Rakovsky. Acting Director of Yarenergo Konstantin Kotikov and his deputies in all areas of the branch were as the host side. 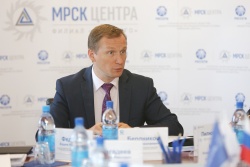 Adverse weather conditions during the winter period of 2013-2014 identified a number of problems. Therefore, before beginning the work on preparation of the electric grid complex of IDGC of Centre for the autumn-winter operation period the company’s specialists analyzed the causes of technological failures and outlined a series of measures to prevent them.

Among the priority activities are clearing and extension of ROWs, formation of reserve of first responding mobile crews and their training. In addition, it is planned to acquire off-highway vehicles, greater efforts to improve the observability of the electric grid complex of Yarenergo, equipping power lines with grid automation devices and capability of remote switching in places of unscheduled outages.

Furthermore, the Yaroslavl branch of IDGC of Centre will implement a set of measures aimed at improving the efficiency of the electric grid complex during natural weather phenomena. They relate to the work of staff for reliable energy supply; interaction with administrations of rural settlements, meteorological services and forest ranger stations; attraction of operators and additional labour force; updating the list of socially important facilities; alerting consumers and a number of other areas of work.

Currently preparing for the autumn-winter period is in its most active stage: for the third quarter the largest volume of scheduled repair, clearing and expanding ROWs is planned. By the beginning of the cold season Yaroslavl power engineers will have repaired 20 main substations of 35-110 kV, 594 transformer substations and 1,944 km of power lines for all voltage classes. Within the service of overhead lines 1,605 hectares of ROWs will be cleared. Expansion is planned in the amount of 595 hectares. However, one of the objectives of the visit to Yaroslavl of Roman Berdnikov was to discuss with the leaders of the region to increase this amount as about 250 hectares must also be cleared to provide reliable power supply to consumers.

Starting from the end of the summer training of personnel will begin, including joint exercises with EMERCOM, the single dispatcher service, community services and forest protection services. The entire preparation will end in mid-October. By that point Yarenergo will also be fully equipped with emergency reserve and a fleet of standby power supply sources.

During the meeting the leaders of the branch reported to Russian Grids on the number of reconstructed facilities, volumes of retooling and new construction.

The result of the technical and organizational work will increase the reliability of electrical networks of the Yaroslavl region in conditions of seasonal peak loads. In confirmation of this fact regulators should give the energy sector a relevant document – a certificate of readiness for the autumn-winter operation period.

Распечатать…
See also
18 May 2022 Stanislav Voskresensky and Igor Makovskiy discussed the power grid infrastructure of the Ivanovo region
16 May 2022 Igor Makovskiy thanked the power engineers for the prompt restoration of electricity supply to residents of the regions of the Central Federal District
16 May 2022 The Rosseti Centre company published its financial statements for 1Q 2022 under RAS, net profit increased by 11,4%
16 May 2022 Kurskenergo is 64 years old!