From 3 to 5 April in Sochi Winter Olympics of workers of the electric grid complex took place. This was the first joint corporate event within the formation of a unified energy complex and the most massive sports days in the history of the competition in grid companies — about 650 employees took part in them. 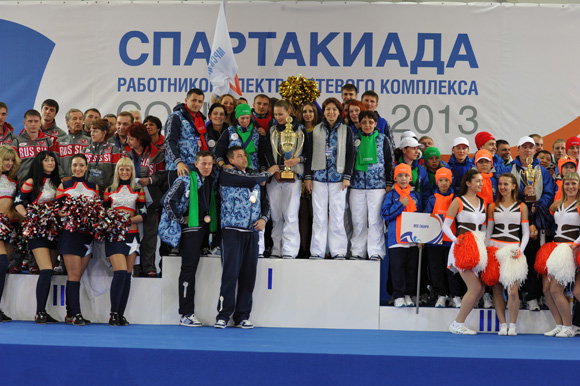 By a tradition, Chairman of the Management Board of FGC UES Oleg Budargin came himself to cheer up athletes, which once again proves that the promotion and development of physical culture and sports in FGC UES is an important part of its corporate policy.

During the closing ceremony the head of Federal Grid Company noted that the main purpose of the Olympics was the consolidation of the employees of all the companies that make up the electric grid into a single cohesive team of professionals.

«We, the power engineers — a big family having one common goal — reliable power supply to Russian consumers. And it is important that the current Olympics have become a real family holiday — our workers came here with their wives and children who had the opportunity not only to support the athletes, but they also were competing. Such events allow to bring people together, share experiences in an informal environment, strengthen team spirit and create preconditions together to solve problems. I am sure that the energy of sport will ensure future success in the industrial sector as well,» noted Oleg Budargin.

The head of Federal Grid Company also spoke about the creation of a single management company in the electric grid sector. «It is symbolic that our sports days coincided with the official establishment of OJSC „Russian Grids“. And now we all have the main task — the formation of a strong team that can also, as here in the sports arena, shoulder to shoulder, solve complex issues facing the electric grid complex of the country. As these three days have shown, we have enough strength and energy for this,» said Oleg Budargin.

For the right to be the best sports team IDGC of Centre was competing with 24 teams.

Dmitry Guberniev, a leading television sports commentator of Russia TV Channel, said parting words to the relay participants. In the Town Hall Square there was a family relay «Merry Starts», which was a real family celebration of physical culture and sports. Children of employees became successors of sporting traditions of power grid engineers. About 80 children with their parents took part in the team competition in the open air.

Sports games were held at venues of the upcoming 2014 Sochi Olympics. The main venue for most of the competitions was the ski resort «Rosa Khutor». Cross-country skiing and a mixed ski-shooting relay took place in the mountains at an altitude of 2300 metres above sea level. Tournament in mini-football was held in the sports complex «Youth» in Adler. The final event of the Olympics was a friendly match of ice hockey between electric grid employees and workers of State Enterprise «Olympstroy». The event was held at the ice arena in the Olympic Park.

The sports holiday ended up with an awarding ceremony of the winners of the Winter Olympics. The three-day sports competitions in ski racing, shooting, mini-football and cheerleader teams’ contest were summed up, whose performances decorated the sports battles. The winners were awarded cups and medals. A gift for all participants of the event was a bright ice show, as well as a mass production with elements of acrobatics performed by 60 cheerleaders.

Please, be reminded that the unified sports event of the electric grid complex was held in Sochi not accidentally. The joint corporate Olympics are continuation of activities to promote uniform high standards in production and social spheres. The Sochi region in this area is a pilot site. There are already successfully implemented solutions, which are being rolled out to other regions. In particular, the Single Power Supply Control Centre has been commissioned in Sochi, and a single emergency reserve of energy companies has been created and many others.