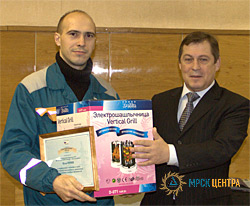 In the name of the head of IDGC of Centre — Belgorodenergo division Roman Tkachenko a letter was received from a resident of the village of October of Belgorod district V.A. Timokhina in which the woman was grateful to electricians of Belgorod Distribution Zone for the help. In an emergency, the power engineers did not lose head, having provided first aid to the victim quickly and correctly.

The working day of the electricians Ilya Yurin and Mikhail Zhukov began as usual. They received travel directions and went to the village of October to calibrate a meter in a private home. Upon arrival, they rang the door and began to wait for owners. On the porch appeared an elderly woman. After a few steps, she suddenly slipped, fell down the steps and hit her head and lost her consciousness.

The electricians rushed to help the owner. Being afraid that the woman in the fall injured her spine, they did not attempt to elevate her. Using ammonia from their kit, they assisted the woman to regain her consciousness, sheltered and warmed with their jackets and called the ambulance. However, doctors were not able to come quickly to the call, so the electricians organized transportation of the victims to the village ambulance, from where she was transferred to the hospital of the regional centre.

After that electricians returned to the house of the victim, they performed work and reported his wife incident to the house owner. 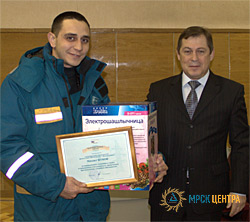 After an examination it was found that the 67-year-old woman had concussion, extensive bruising on her head and a dislocated collarbone with torn ligaments.

From the letter of the injured to the management of IDGC of Centre — Belgorodenergo division: “Even in the hospital, I realized what great help the guys had provided. Their names I learned from the certificate of the work completion. They are not only good specialists, but great people. I was sincerely touched by their act. Now there are a lot of indifferent people. These sympathetic decent guys arouse sincere respect.”

“We did not do anything special. Seeing that we could not hesitate, we quickly tried to do all that was necessary, — stressed Mikhail Zhukov. — Fortunately, the woman recovered and now feels fine.”

For the indifferent attitude to people and civic responsibility, manifested in the performance of official duties on behalf of IDGC of Centre — Belgorodenergo division the electricians were awarded letters of appreciation.