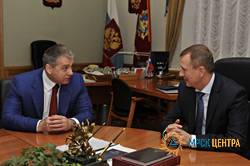 In the Bryansk Regional Administration Office a meeting of Acting General Director of IDGC of Centre Oleg Isaev with Governor of the Bryansk region Nikolay Denin took place.

During the meeting the parties discussed future development of the power grid complex of the Bryansk region.

Oleg Isaev underlined that IDGC of Centre — Bryanskenergo division had performed some considerable amount of work on reconstruction and construction in order to increase reliability of power supply. Last year we completed a large-scale reconstruction of the 110 kV substation “Soviet” in Bryansk — one of the most strategically important energy facilities, whose reliable operation the energy security and future development of the city depends on.

In 2013, IDGC of Centre will complete reconstruction of the 110 kV substations “Gorodische” and “Karachizhskaya”, after which the two power facility will move into the category of available feeding centres that will allow to effectively implement the plan of development of the region in attracting major investors, strengthening its industrial and economic potentials. The investment program of IDGC of Centre in the Bryansk region will exceed 684 million rubles in 2013.

Oleg Isaev also told the head of the region of what was being implemented by IDGC of Centre — Bryanskenergo division for the stable operation of the power complex in the autumn-winter peak load period: a considerable amount of the repair program had been performed, one hundred percent emergency reserve had been formed, the staff of mobile crews had been that were fully provided with special vehicles.

The working meeting of Acting General Director of IDGC of Centre Oleg Isaev with Governor of the Bryansk region Nikolay Denin was part of the acquaintance of the head of the company with top managers of regions in which IDGC of Centre operates.