A mobile crew of IDGC of Centre — Tambovenergo division for two weeks was performing work to expand the ROW near the high-voltage power line 110 kV “BRES-Cement”, referring to the service area of Bryanskenergo. Technicians of the power lines service of Tambovenergo came to help their Bryansk colleagues and supported for the implementation of plans to prepare for the autumn-winter peak loads.

The expansion of the ROW around the Conductor 110 kV “BRES-Cement” was included in the investment program of Bryanskenergo for 2012 due to special significance of the power facility. The high-voltage line is a transit one and connects the Kaluga, Bryansk, and Orel power grids.

As Deputy General Director of IDGC of Centre — Tambovenergo division director Vladimir Syschikov noted: “Tambov power engineers are always ready to lend a helping hand to colleagues. Mutual assistance in difficult situations is necessary to ensure uninterrupted power supply in any conditions. Mutual assistance of power engineers on the territory of neighbouring regions is an important condition to ensure the reliability and continuity of power supply to consumers.”

The work of the Tambov power engineers was highly appreciated by the leadership of IDGC of Centre. This is due to the fact that the select crew included the most experienced staff of Tambovenergo. It should be noted that they had proven to be the best a few years ago, when they participated in the liquidation of the consequences of abnormal “sleet”, which passed over the Central Region in December 2010. Thanks to the mobility, good technical equipment and highly skilled employees of the company the energy supply in the affected areas was restored in the shortest possible time. 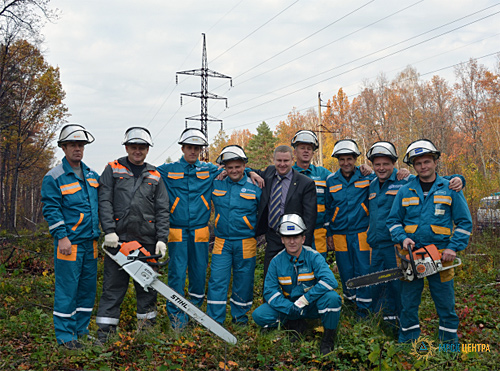 During the business trip the specialists expanded ROWs in an area of five hectares of forest and wetland. The work was performed on the territory of Fokinsky forestry. Age of the forest is close to a century-long boundary, so the height of most of the trees is greater than the height of poles. Felling of trees requires special care and attention, and in general — high professional skills.

“Every expert of the crew was aware of the responsibility entrusted to the case and tried to do the job quickly and efficiently, regardless of personal time. Despite the fact that the schedule of the day was non-standard, and the working conditions rather complicated, the power engineers successfully completed the expansion of the ROW,”- informed Chief of the power lines service of IDGC of Centre — Tambovenergo division Alexander Fekolkin.

Evaluating the results of the work performed, Chief of the power lines service of IDGC of Centre — Bryanskenergo division Alexander Lukichev underlined: “The Tambov power engineers — a friendly and close-knit team, which can cope with a challenge of any complexity. Many thanks to them for decent work! Thanks to their support we were able to fully prepare the Bryansk grid for the autumn-winter period and to get the Certificate of readiness in time.”

Creating mobile crews based on IDGC of Centre allows the company to regroup the forces at electric grid facilities and, if necessary, to help power engineers of neighbouring regions quickly. This is a special emergency restoration mobile reserve, formed of highly qualified workers who have received additional training. Mobile crews allow the company to respond quickly to possible major technological violations during peak loads and, if necessary, in a timely manner to assist power engineers neighbouring regions.