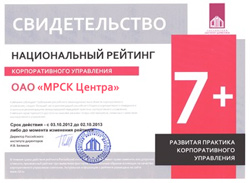 Since the confirmation of the National Corporate Governance Rating (NCGR) in August 2011 IDGC of Centre has had a number of corporate events.

In particular, the Annual General Meeting of Shareholders was held in 2011. The meeting elected the new Board of Directors and Audit Commission, approved amendments to the Articles of Association, the new edition of the Regulations on the procedure for convening and holding meetings of the Board of Directors of IDGC of Centre, and declared dividends for 2011.

According to the results of the tender ZAO “KPMG” was chosen as the external auditor of the Company in accordance with IFRS and RAS, part of the “big four” world’s leading auditing firms.

The Audit Commission was composed of five persons who are not members of management or employees of the Company, ensuring the objectivity and independence of its judgment.

August 23, 2012 the Extraordinary General Meeting of Shareholders was held in IDGC of Centre, which approved the new Board of Directors of the Company.

The Board of Directors consists of 11 members, of which two meet substantive aspects of independence[1] (Shevchuk A.V., Kulikov D.V.). One director is an executive (CEO of IDGC of Centre Gudzhoyan D.O.) and eight directors — non-executive.

The corporate governance practice of the Company in terms of the management and control bodies is estimated well. Among the key positive aspects of this practice the Consortium’s experts note the following:

— the Board of Directors provides the necessary balance between the interests of its independence from management. In addition, there are two independent directors and minority shareholders’ representatives in it, which suggests it is balanced in terms of the interests of all stakeholders;

— in the Company there is an order declaring by the members of the Board of Directors and members of the executive bodies of their affiliation, and their responsibility to provide information on the ownership of the Company’s securities and transactions with them is also fixed;

— remuneration of members of the Board of Directors and senior managers of IDGC of Centre depends on the performance of the Company;

— the Company has approved internal regulations governing the implementation of internal control over financial and economic activities, the Board of Directors annually assesses the effectiveness of the internal control system of IDGC of Centre;

The corporate governance practice of the Company in terms of disclosure of information about its activities is ranked high. The Company has undertaken a number of significant steps to ensure the transparency of its operations and the continuity of this practice in the future.

The corporate governance practice of the Company in terms of its activity in the interests of other stakeholders, and corporate social responsibility is estimated well. The Company implements a variety of social projects for its employees and their families, service customers and is actively involved in charity and sponsorship.