A meeting was held in Moscow, led by Chairman of the Management Board of FGC UES Oleg Budargin to prepare the electric grid complex of the Central Federal District for the winter peak loads

The event, in addition to branch managers of FGC UES and IDGC Holding, was attended by representatives of the regional authorities, the RTN and the System Operator. This is the fifth such meeting. The previous ones were held in Sochi (SFD), Krasnoyarsk (NFO), St. Petersburg (NWFD) and Khabarovsk (FEFD).

In the service area of grid companies of the CFD there are 18 subjects of the Russian Federation with a population of over 38 million people. More than 62 thousand employees of grid companies supply power to them, who are in charge of 658,110 km of power lines with a voltage class from 6 to 1150 kV, transformers with a total capacity of 204,827 MVA.

Opening the meeting, Oleg Budargin noted that today, when the heating season starts up in less than a month, and the preparatory work is coming to a close, it is important to maintain a working atmosphere and vigilance. “The end of the preparation and repair programs — not a reason to relax. On the contrary, we are entering the most critical period. And in the foreground, everyone must consider reliability. That is what all our efforts should be focused on,”- said Head of the Federal Grid Company.

Oleg Budargin also gave an order to prepare uniform action algorithms in extreme situations. “Every time there is one or another emergency situation, including by reason of weather, usually there is nothing new. Therefore, each head of the production unit at each facility should have standard algorithms of action, based on past experience, achievements of neighbouring regions. This will significantly increase the efficiency of decision-making and response,”- he underlined. 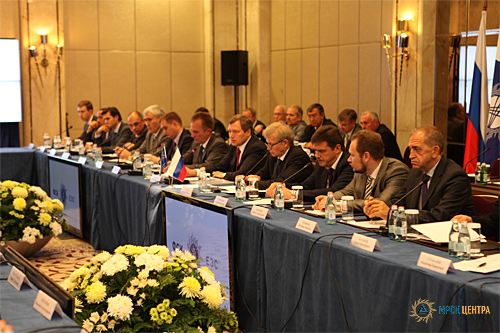 In addition, Chairman of the Management Board of FGC UES made a special point of executives of grid companies of the work on energy supply to social facilities. “Working with this category of consumers should be kept permanently. The direction is more urgent in winter, when the severity of the fault in the power supply is much higher than in the summer,”- underlined Oleg Budargin.

During the meeting, the readiness for the heating season was reported on by heads of regional divisions of FGC UES, IDGC of Centre, IDGC of Centre and Volga region, Moscow United Electric Grid Company. It was noted that in all the regions of the Central Federal District the maintenance campaign and implementation of mandatory measures to prepare for the autumn-winter period is in strict accordance with the plan. All work is done on time, and by 15 October all the grid companies will have their certificate of readiness for the autumn-winter period

In the territory of the entire Central Federal District, there is cooperation set of power engineers with the authorities and EMERCOM. A unified automated system for display and analysis of emergency reserve of FGC UES and IDGC Holding is being implemented, which will minimize the liquidation of emergency situations and lower costs of emergency reserve. More than 1,000 diesel generator sets are available to provide temporary power supply, agreements with airlines were signed to use helicopters to fly over overhead power lines. 19 exercises were conducted to work out collaboration in the elimination of emergency operation, the most typical for the winter season, involving EMERCOM, administrative and executive authorities of subjects.

If necessary 600 line crews and 8517 units of special vehicles will be involved for restoration. In addition, under the agreements with contractors a possibility is provided to further engage 4973 specialists and 1212 units of special equipment for emergency response.

In the branch of FGC UES — MES of Centre — the current repair program by September 2012 was performed at 106% (from the planned by the current date.) In particular, much work was performed to repair autotransformers (30 pcs.), switches (298 pcs.), disconnectors (1244 pcs.), compressors (32 pcs.); poles were reinforced (37 pcs.), replacement of insulators (7355 pcs.), ground wire (366.7 km), spacers (1432 pcs.), HV bushings (69 pcs.) and pole and rod insulation (4772 pcs.). 4654 hectares of ROWS were cleared along overhead lines. Within the investment program since the beginning of the year 3904 MVA of additional transformer capacity and 630 km of transmission lines were commissioned. The branch paid considerable attention in preparation for the autumn-winter 2012/2013 to staff development and minimization of restoration time. For each type of equipment immediate response cards were developed with reference to the facility and indicating the restoration time, storage sites of emergency reserve, resources, technology, and optimal entrance locations. Stocking with emergency reserve is at 100%. A unified automated system for display and analysis of emergency reserve of FGC UES was developed, which will minimize the liquidation of emergency situations and reduce the cost of servicing the emergency reserve.

IDGC of Centre and Volga Region for 8 months of 2012 cleared 10 246.8 ha of ROWs along overhead lines (82.5% of the yearly target). There are 345 redundant power supply systems in the Central Federal District with a total capacity of 12.6 MW. The company has in total 700 sources of reserve power with a total capacity of 21.2 MW, of which 186 units with a capacity of  which are used to provide power to critical customers and infrastructure facilities during the repair work, including the elimination of failures and emergencies. Also IDGC of Centre and Volga Region has available 5 mobile 110/10(6) kV power plants of 25 MVA. In January 2012 the Joint Information and Situation Center (JISC) was launched, which combines operational and situational centre of the company, customer service centre and Call-centre. It collects all the information on deviations from the normal scheme of the grid, as well as emergency outages, impact and restoration activities status. Nearly 2,000 requests from consumers came there for the first half of the year.

IDGC of Centre since the beginning of the year has repaired more than 3,200 transformer substations. About 11 196.1 hectares of ROWs were cleared against the annual plan of 16 198.3 ha. In addition, over 3700 km of high-voltage power lines of  as well as about 8200 km of medium and low voltage lines were overhauled. The planned schedule of the maintenance program was made more than at 95%. In 2012, the vehicle fleet was retrofitted and modernized in all branches of IDGC of Centre — in total 164 units of special vehicles, most of which are off-road, equipped with GLONASS. The so-called “energy special forces” were created: 90 crews of increased mobility totalling 519 people. This is a special emergency recovery mobile reserve, formed of highly qualified workers who have received additional training. In preparation for successful operation through the autumn-winter period IDGC of Centre is performing an innovative project to implement the distribution and outage management system (DMS/OMS System), which allows to respond more quickly to emergencies caused by weather conditions.

In the Moscow region, power engineers of Moscow United Electric Grid Company for 8 months of the year cleared ROWs in an area of 2062 hectares along power lines of  which is 70% of the annual plan. Also 1689 transformer substations were renovated, 2,150 power lines of  were repaired. For the autumn-winter peak load the company created its 100% central emergency stock of equipment. 82 diesel generator sets are available to provide temporary power supply. Mobile crews are fully equipped with personal protective equipment, clothing, tools, gear, rigging, communication means. Transport units are provided adequately with fuel and spare parts. The fleet of mobile equipment, which is 1699 units, is in full operation readiness. In addition, Moscow United Electric Grid Company concluded 75 agreements with contractors to perform urgent restoration. The total staff of contractors, involved in case of emergency and repair work, is 4323 people (398 crews). The total number of vehicles of contractors is 1016 units, including 447 motor vehicles, 155 tractors, 205 units of hoisting equipment and 214 units of special vehicles.

Closing the meeting, Chairman of the Management Board of FGC UES Oleg Budargin set a number of priorities, including organization of business interaction among grid companies, also in terms of the coherence of emergency personnel actions with authorities, EMERCOM and contractors, as well as constant readiness for emergency situations which provides, in particular, the achievement of a high level of technical facilities and an emergency reserve availability.