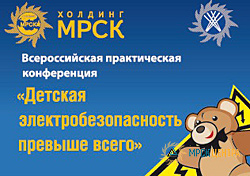 In Veliky Novgorod there was the first All-Russian Practical Conference “Children’s electrical safety above all”, organized by IDGC Holding. Apart from power engineers, it brought together representatives of the Institute of Commissioners for Children’s Rights under the President of Russia, Ministry of Education and Science of Russia, Ministry of Emergency Situations, Ministry of Interior, RTN, the Federal Agency for Youth “Rosmolodezh” and public organizations.

At the conference, IDGC of Centre showed its experience and achievements to prevent children’s injuries on power. 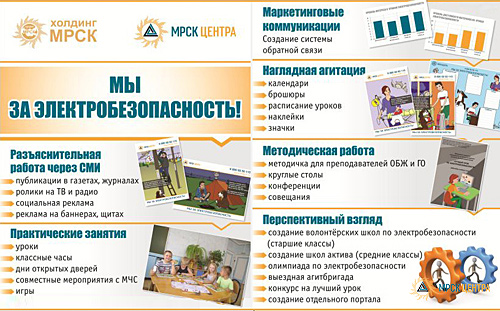 The company pays close attention to this work: during the year the staff have special classes in schools and day care centers, children’s homes and recreational camps, organize the round table discussions on the topic involving not only power engineers, but also representatives of the executive and legislative branches, educational institutions, produce specialized literature, visual aids and guidelines.

In the Kostroma region a project “Safe Childhood” is being realized together with the regional newspaper “North Truth”: a specialized memo was developed and published in this issue’s pages, over 16,000 copies of which were spread throughout the region. The power engineers also conducted a survey of teachers and parents on the basis of which the proposals will be made in the program of activities for 2013.

In the Belgorod region the power engineers of IDGC of Centre — Belgorodenergo division released a compilation of the best lessons on electrical safety. The authors of the book were the winners and prize holders of the regional competition of lessons that since 2010 Belgorodenergo has been holding jointly with the Department of Education, Culture and Youth Policy. The guideline includes print and video materials, which in details tell about how to bring to the children the rules of electrical safety.

The experience of IDGC of Centre in Veliky Novgorod was presented in the form of presentations, exhibits, catalog materials, and most importantly — the active participation of the company’s representatives in the thematic workshops and other events of the All-Russian Practical Conference. 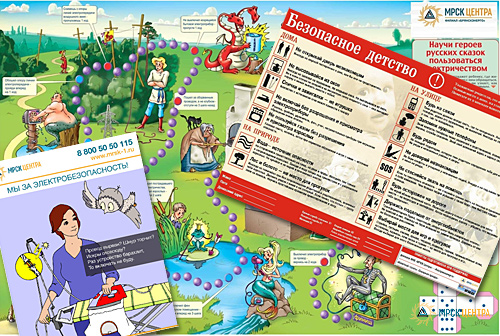 The Practical Conference in Veliky Novgorod was the final stage of the nationwide exchange of knowledge, experiences, technologies, methods of prevention of children’s electric injuries. All developments will be generated in a single system of activities to prevent children’s injuries at the electric grid complex. It will contain measures to inform the public through electronic and print media, multimedia, and printing products, web-based communications tools and outdoor advertising, as well as the organization of the educational and training process for the transfer of knowledge to children and teenagers about the basics of electricity handling.

“The main objective of the conference — not only to draw the governmental and business attention to electrical safety of children, but mainly to show examples of a practical solution to prevent children’s electric injuries, the need to consolidate inter-agency resources for development in children self-defense reflexes, and habits of safe behavior. It was decided to combine the practice and science, educational and work areas, and even sports and culture to make it serve the nationwide project ‘Safe Childhood’ — the organizers of the conference noted. — A specific socio-cultural environment is needed in which the government, business and civil society will put their efforts together to prevent the ingress of children and adolescents in the pockets of danger, and when confronted with the threats to prepare them for the adequate behavior. We agreed with lawmakers to clarify the concept of ‘energy safety’, to collaborate on initiatives to stimulate the formation of the state motivation for integrated children’s safety (telephone, traffic, fire, electric, etc.), to relate promotional materials for the prevention of children’s electric injuries to social advertising with placement in the electronic and print media on a non-commercial basis”.

The Conference’s participants made an appeal to the Ministry of Education and Science of the Russian Federation to include in the subject “Basic Life Safety” a special section “Electrical Safety”. To do this, the participants suggested creating a working group to harmonize common scenarios of electrical safety lessons and develop outreach materials on the subject (brochures, videos, flash games, learning merchandise, comics, etc.).

The Novgorod, Nizhny Novgorod, Rostov and Moscow regions were selected as pilot regions for the development of a comprehensive safety program of children’s safety, which will include sections on fire, road, telephone and electrical safety. As part of the Program implementation in  is planned to create one electricity profile classes in secondary schools of the pilot regions. In the future, we can talk about the Association of Russian schools with some electricity profile.