«The Election Commission of the Kostroma region thanks you for your personal contribution to the work to ensure uninterrupted power supply to the facilities for voting and election commissions at various levels, operating in the Kostroma region during the campaign for elections to the state authorities of the Russian Federation in  says one of the letters of gratitude.

On the election day of the President of Russia IDGC of Centre in the Kostroma region arranged 83 crews on duty. Among them: the substation, line crews, relay protection, automation, measurement and metrology service crews. For a quick response to possible interruptions in the electricity supply 182 generators were prepared, 71 generators were installed directly on the premises of polling stations and territorial election commissions. All the 619 polling stations in the Kostroma region had communication with.

Sergey Zhichin emphasized professionalism and responsibility of Kostroma power engineers who ensured on a single voting day a reliable and uninterrupted power supply of 120 polling stations in the city of Kostroma. «The work of the Direct Power Hot Line at 8800 50 50 115 had big popularity and effectiveness, at which voters received professional and competent answers to their questions. We wish you and your staff to continue success in the development of the country’s power industry», — stresses the letter of thanks. 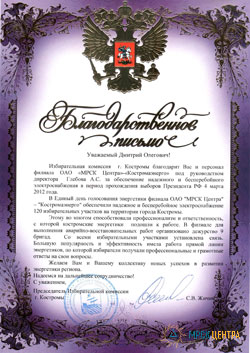 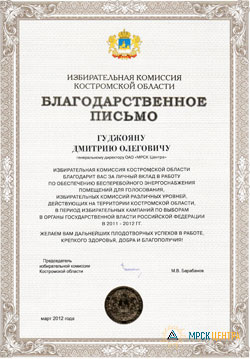