In the fourth quarter of this year, power engineers of IDGC of Centre have implemented a technological connection and supplied power to large socially important facilities under construction in the Lipetsk region, whose implementation is carried out under government programs.

Thus, within the framework of development of the special economic zone “Chaplygin” of the Lipetsk region the power engineers of the Company have supplied power to the construction site of the future production plant of water valves and fittings of the Austrian company “Hawle Industriewerke”. Recently there has been put into operation the first phase of construction of this plant, which was made possible thanks, in particular, to the quality work of the power engineers. 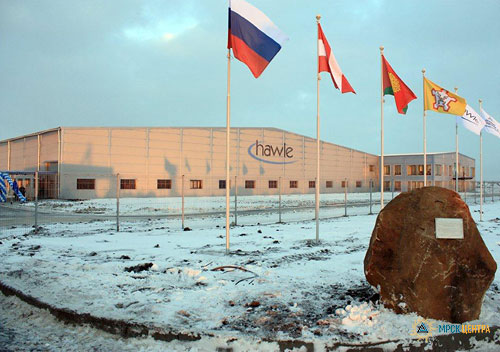 To create a temporary power supply circuit over 14 km of 110 kV power lines were built and an additional 10 kV distribution point of a modular type was installed. Currently, the work is underway to lay four 10 kV cable lines, which is over 8 km in length. The supply substation of this circuit will be the substation “Compressor” of 110/35 kV voltage. IDGC of Centre has already spent more than 77 million rubles on these activities.

When you create a new electric grid infrastructure most modern equipment and materials are used: two new bays of the substations “Compressor” have vacuum circuit breakers installed to ensure the turnaround period of operation is  In accordance with the requirements of the technical policy of IDGC of Centre the distribution point has a telemetry system installed for collecting and transmitting data through a fiber optic connection. In order to improve the reliability of overhead power lines during thunderstorm periods the specialists of the Company installed ground wire.

To run a full production cycle of the company’s factory “Hawle Industriewerke” power engineers of IDGC of Centre will supply 12 MVA additional power. For this a new 110/10 kV substation with two transformers with a capacity of 40 MVA will be constructed. Implementation of the project will provide electricity also to other enterprises of the economic zone “Chaplygin”, among which a plant to produce sugar beet harvesters “ROPA-Rus”, a manufacturer of drip irrigation systems “New age agrotechnologies”.

Another significant contribution of power engineers of IDGC of Centre in the development of the region’s investment strategy and implementation of the country’s food program has been the power supply of a large cattle-breeding complex of the Russian-French company “Otrada GEN” in Dobrinsky district of the Lipetsk region. The design of this complex, sized for 55 000 heads of animals, also involves the construction of two farm-sites, a granary and feed plant. Its implementation is part of the state program “Development of agriculture and regulation of markets for agricultural products, raw materials and food for and it will contribute to import substitution.

To supply power to one of the farm-sites — “Pedigree sow farm” the power engineers will shortly construct 3.5 km of 10 kV overhead power lines overhead line from the 10 kV tap “Victory” fed from the substation “Novocherkutino” of 35/10 kV voltage. Providing electricity to the second farm-site “Fattening” will be implemented from the 10 kV power line “Otrada”. Here the power engineers will construct several new power lines, the power source for which will be the substation “Khvorostyanka” of 110/35 kV voltage. As a result of the work done power installations of the pig enterprise will be provided with an additional capacity of 1.2 MW. Start-up of the animal-breeding complex is planned for 2012.

According to General Director of “Otrada GEN” Patrick Hoffmann, over the next 3 — 4 years it is planned to build another six such complexes in the Lipetsk region: “The belief that the plans for construction will be implemented, gives the understanding of the situation by power engineers of DGC of Centre. Thanks to the tremendous work they have done the power supply will be in the complex being built before animals will be brought in there”.