Opening the seminar-meeting, Deputy General Director — Head of Administration of IDGC Holding Alexander Popov noted that “the main challenge for the structural units responsible for working with the staff, should be the preservation of human resources in companies in the conditions of need to optimize headcounts and HR costs”. He named the intensification of cooperation with educational institutions as one of the key tools for the support and development of human resources of companies to attract young people to work in the group of companies IDGC Holding. Alexander Popov also noted that 2011 has been marked with the conclusion of the agreements between IDGC Holding and leading power engineering institutions of the country — Moscow Power Engineering Institute (Technical University) and Ivanovo State Power Engineering University after V.I. Lenin.

Head of HR Department of IDGC Holding Andrey Chigrin presented a comparative analysis of companies in the field of personnel management and organization design in the current year.

Head of Organization Development Department of IDGC Holding Nataliya Erpsher summed up the outcome of the project implementation to move companies to the typified organizational and functional structures. In addition, she specified (in continuation of work on the unification of functional structures) the long-term objectives to develop unified qualification requirements for employees and briefed her colleagues on the project being implemented by the Ministry of Energy of Russia to establish a national system of qualifications.

HR Director — Head of HR and organization design Department of IDGC of Centre Alexander Lyaskin reported on the implementation of the Program to support and develop staff capacity in the company and the results of the Youth Policy.

The meeting identified key issues in the field of human resource management and organization design in the short term, summed up the preliminary results of the activities of IDGC/DGC in 2011 in the field of personnel management. The following issues were also discussed such as the transition of the companies of IDGC Holding to the typified organizational and functional structure, optimizing the number of personnel, the need to enhance the effectiveness of partnerships with labor unions; expanding the forms of cooperation with institutions of higher and secondary vocational education.

In the first phase of the project to build up the youth personnel reserve “Young support of IDGC Holding” the meeting summed up the outcome of the formation of the youth staff reserve of IDGC. The discussion of current issues in human resource management was held in the format of round tables. 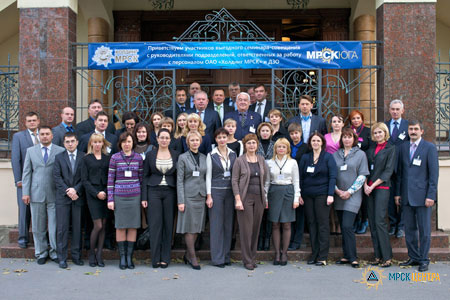