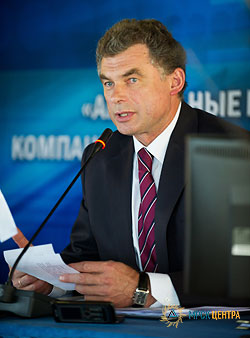 On September this year in the cities of Moscow and Uglich the All-Russian production meeting was held, which was attended by the heads of all operating companies of IDGC Holding and its affiliates. The preliminary results of IDGC/DGC operations in 2011were discussed and key challenges for the near future were identified.

As noted by the General Director of IDGC Holding, Nikolay Shvets, the main task in the coming years for the distribution grid utilities is to increase operating efficiency of IDGC/DGC. This is due in the first place, to increasing requirements for reliability of electric networks, which in turn requires the need to attract significant investments.

In preparation of the Strategy of IDGC Holding for the period of up to 2015 with the prospect of up to 2020 a number of areas of work were identified, containing considerable potential to reduce costs. First and foremost, it concerns the transmission losses of electricity, which now averages 8.5%, while the leading foreign power grid companies have this indicator at approximately 6%. Work to reduce the losses will be carried out in several directions, including the installation of new energy efficient equipment, implementation of advanced metering devices and administrative measures against theft of electricity, as well as the transfer of 0.4 kV distribution networks to the voltage class higher.

Significant economic benefits may be obtained by optimizing the planning and qualitative implementation of investment programs. In particular, by increasing the share of high-efficient power grid facilities, reduction of capital costs, typification of technological solutions, implementation of performance indicators of the investment program in terms of reliability and quality of electricity supply. Using the benchmarking methodology, electrical distribution companies of IDGC Holding plan to reach the level of international standards for electricity supply of consumers.

In addition, companies of IDGC Holding will have to calculate SAIDI and SAIFI indicators (the average duration and frequency of outages), which are used by major foreign energy companies to determine the quality and reliability of electricity supply.

In general, according to Nikolay Shvets, IDGC Holding has significant growth potential of the assets up to 480 billion rubles compared with the current estimate of 160 billion rubles.

With regard to the ongoing preparation of the electric distribution grid companies for the autumn-winter peak load, the repair program of IDGC Holding (total amount for 2011 — 21 billion rubles) is being performed in accordance with the schedule, and repair of power transformers and transformer substations as well as ROW clearing is running ahead of the schedule.

The consolidated investment program of IDGC Holding for 2011 envisages the construction of more than 17.5 thousand km of power lines and commissioning of transformer capacity of about 8 thousand MVA. Capital investments are projected at 130.7 billion rubles (excluding VAT).

In their speeches the top managers of IDGC Holding also touched upon the issues of international cooperation, efficiency improvement of the state as a controlling shareholder of the management company IDGC Holding, tariff making, improvement of the reliability of power supply, innovative development, reduction of grid losses, optimization of investment activities, transition to international standards of financial reporting, reduction of accounts receivable, the concept of a single reputational policy, the strategy of development of information and telecommunication technologies in the electricity distribution sector, as well as training, provision of counter-terrorism security of power grid facilities.