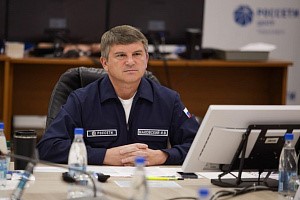 At the meeting of the Headquarters, General Director of the Companies summed up the preliminary results of the implementation of a large-scale set of measures to bring 6-10 kV power grids to the standard state in the Tver region.

By the end of June, the reinforced grouping of crews and specialized vehicles of power engineers will complete the clearing of 6,035 kilometres of power lines, prune crowns and cut trees that threaten to fall on the power lines, repull wires, straighten poles. To date, 85% of the work has been fully completed and accepted by the Tverenergo branch. The head of Rosseti Centre and Rosseti Centre and Volga Region demanded strict adherence to the deadlines for all planned activities.

During the meeting of the Headquarters, measures were also considered to improve the reliability of power supply to residents in the Tula, Kostroma and Nizhny Novgorod regions. In particular, the directors of the branches reported in detail on the organizational and technical measures that will be implemented in the coming months. They relate to the clearing and expansion of routes in security zones of power lines with replacement of bare wires with self-supporting insulated ones, acquisition of additional specialized vehicles and devices that allow to identify faults on power lines, development of digital radio communications and modernization of the system for collecting and transmitting information about outages. Particular attention was paid to improving interaction with the executive authorities of regions and municipalities.

General Director of the energy companies also instructed to analyze the participation of employees of the branches of the Companies in repair work in the Tver region and prepare materials for submission to the departmental awards of the most distinguished employees.

«This year, the power engineers have repeatedly had to deal with abnormal weather events. It is very important that the power supply of settlements is less and less dependent on the elements. The planned measures will allow not only to reduce the number of technological violations, but also to increase the efficiency of our personnel’s actions during emergency recovery operations,» stressed Igor Makovskiy, General Director of Rosseti Centre and Rosseti Centre and Volga Region.