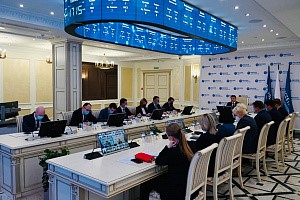 Please, be reminded that in mid-March, the head of the energy companies set the task to take under increased control of the territories where the maximum flood intensity was expected. This is a number of districts of the Bryansk, Vladimir, Voronezh, Ivanovo, Kaluga, Kostroma, Kirov, Nizhny Novgorod, Ryazan, Smolensk, Tambov, Tula, Yaroslavl regions and the Republic of Udmurtia. By the decision of the Headquarters of the Companies, trainings were held to practice actions aimed at ensuring reliable power supply to these regions. Power engineers examined the passage of power transmission lines across rivers, checked the condition of foundations and the protection of the foundations from ice drift at poles exposed to flooding and erosion.

Igor Makovskiy thanked his colleagues for their systematic work and instructed to continue constant monitoring of the situation on the ground.

«Thanks to well-coordinated and prompt actions, we managed to avoid emergency situations on power equipment during the period of snow melting. The flood has not ended yet, but now it is necessary to carry out measures to prepare for the fire-hazardous period. We are talking about inspection of equipment, checking fire extinguishing equipment and working out joint actions with regional departments of the Ministry of Emergency Situations of Russia, executive authorities of regions and municipalities,» stressed General Director of Rosseti Centre and Rosseti Centre and Volga Region.