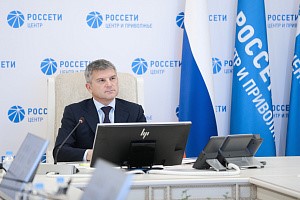 A weekly operational meeting was held at Rosseti Centre and Rosseti Centre and Volga Region under the leadership of General Director Igor Makovskiy. Particular attention was paid to measures taken to ensure trouble-free operation of the power grid complex during the spring flood.

During the meeting, Igor Makovskiy set the task to take under increased control of the territory where the maximum intensity of floods is expected. It is about a number of districts of the Kaluga, Kostroma, Kirov, Nizhny Novgorod, Ryazan, Tver and Yaroslavl regions. General Director of the energy companies also instructed the chief engineer’s unit and the management of branches to conduct trainings on practicing actions aimed at ensuring reliable power supply to residents of the regions and additional briefings with personnel on safe work in flood conditions.

At present, specialists from the branches of Rosseti Centre and Rosseti Centre and Volga Region are constantly monitoring the situation on the ground. To obtain operational information on weather conditions, a clear interaction of the branches of the companies with territorial bodies of Roshydromet, divisions of the EMERCOM of Russia, regional and municipal authorities is ensured.