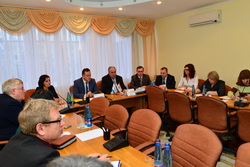 IDGC of Centre held a press tour for journalists of specialized media companies to grid facilities, located in the Kursk region. During the two-day press tour its participants got acquainted with the peculiarities of the Kursk grid, whose 55th anniversary was celebrated these days, met with representatives of the city administration, visited energy facilities, which ensure uninterrupted supply of electricity to the region.

The onset of a large-scale power system in the Kursk region was laid in 1955, when the first turbine of 25 MW was put into operation in Kursk. After the incorporation of «Kurskenergo» in May 1958 the power system of the Kursk region developed according to a single plan, which is based on the development plan of the region’s electricity grid and district heating of Kursk. In subsequent years the, Kursk power system underwent a number of organizational and legal reforms, and March 31, 2008 «Kurskenergo» became a part of IDGC of Centre in the status of a branch.

This year the Kursk grid celebrates the jubilee — the 55th anniversary of its founding. The press tour for journalists of specialized publications at the grid facilities of the company was timed to this date, which was held on 19-20 December 2013. The reporters visited the Grid Control Centre of «Kurskenergo», where they learned its unique features. In addition, the press tour was an acquaintance with the work of the substation «Boiler Room», which transmits power of 115 megawatts from generating equipment of the boiler of Northwestern district in Kursk through five 110 kV lines into the single grid. After extensive renovation the substation is equipped with gas-insulated indoor switchgear and control gear (110 kV GIS) of the Swiss company «AREVA T&D» with 12 gas-insulated bays. One of the main advantages of this equipment is its being compact compared with equal in power energy facilities with outdoor switchgear, and the equipment service life is at least 50 years.

According to Deputy General Director of IDGC of Centre— Kurskenergo division director Alexander Pilyugin, for 55 years the region’s power engineers have supplied electricity to hundreds of thousands of industrial enterprises and residents. «Every year, we deliver more than 5 billion kWh of electricity over its grids. This allows our company to be the absolute leader in the Kursk region to supply electric power to consumers. Moreover, every year we increase the performance. Thus, 32 megawatts of new capacity were connected in 2013,» says Alexander Pilyugin.

At the end of the tour the media representatives took part in the solemn meeting on the occasion of the 55th anniversary of the Kursk Day power system and the Power Engineers’ Day, and to award the best specialists of «Kurskenergo» with certificates of merit of the company.