IDGC of Centre hosted the Day of electrical safety 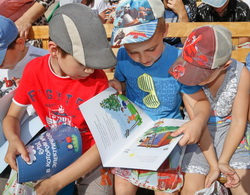 June 1, on the Children’s Day, as part of the Program to reduce risk of occurrence of injuries in the branches of IDGC of Centre traditional Days of electrical safety were held.

In Bryansk on that day the children’s festival «Good electricity» was hosted, which was organized by the Youth Council and the trade union of Bryanskenergo. During the holiday quizzes and performances of young artists took place. In the Distribution Zones of Bryanskenergo a drawing competition on the pavement was held, which was attended by children of all ages from 2 years old. The winners were awarded with certificates «Best Artist», all the participants with sweet gifts.

Employees of Belgorodenergo traditionally visited a social and rehabilitation centre, where a meeting with the famous Belgorod writer Vyacheslav Kolesnikov took place, the author and illustrator of the children’s book «Energoland», written specifically for IDGC of Centre. Based on this book a theatrical dramatization was also created, which first was seen by pupils of the social and rehabilitation centre.

In the Kostroma region the traditional large-scale action «Safe Childhood» got started, organized jointly by Kostromaenergo and the newspaper «North Truth». Within the project there will be a variety of activities, competitions and meetings on the electrical safety topic in children’s schoolyards and field camps. In June, at the first stage of the action, a specialized reminder was jointly developed and released in the newspaper that «sold out» in the region with the circulation of over 16,000 copies. 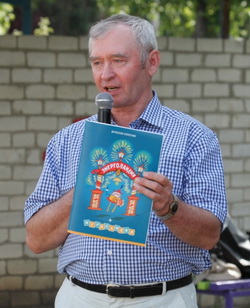 IDGC of Centre pays close attention to the prevention of children’s injuries at power facilities. According to the Program to reduce risk of occurrence of injuries, power engineers in the current year conducted 657 lessons. Every year, in the company on the subject activities are developed and held for children of different ages. A special place in the system of preventive work is given to the development of methods for electrical safety lessons in the course of teaching basic safety. By the beginning of the school year the power engineers plan to issue guidelines for teachers and materials of the best lessons — the winners of the regional competition «The best lesson on electrical safety».

In anticipation of summer holidays the electrical safety theme gained special relevance, so the experts of IDGC of Centre together with teachers held thematic parent s’ meetings to explain and remind them of the need of special supervision by the adult of children’s safe behaviour.

With the start of summer IDGC of Centre has launched a new large-scale prevention campaign. In visiting children’s health and school camps there will be themed activities, games and presentations of the new book «Energoland». The company will also continue an active information campaign through the media, multimedia and printing products, outdoor advertising and web communications.