April 3 the grand opening of Winter Olympics of workers of the electric grid of Russia took place in Sochi. For the first time the event of this magnitude will bring together 24 teams, nine of which are of the executive office and branches of Federal Grid Company, and 12 — companies of the electric distribution grid complex. In addition, there will be three competing teams of students of Moscow Power Engineering Institute, Ivanovo State Power Engineering University and Northern Caucasus Federal University. 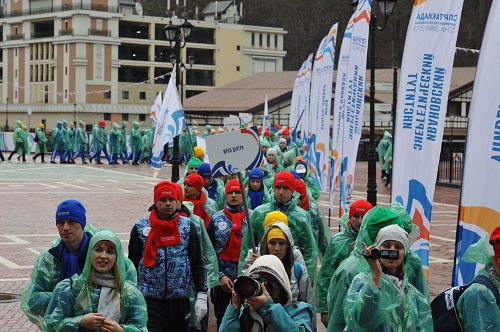 The right to raise the flag of the competition was given to the team captains of the winners of the Summer Games of energy companies — a branch of FGC UES — MES of Siberia Evgeny Abramchenko and IDGC of Volga Pavel Kazakov.

In her opening speech, Deputy Chairperson of the Management Board of FGC UES Natalia Ozhegina noted the importance of the event for many thousands of employees of the energy sector, as well as the high value of the sports games for the development of popular athletics and culture. «Such enormous competitions in the power complex are for the first time. This is a significant event, which emphasizes the unity of our country’s power industry. I’m sure that bringing efforts both in the professional sphere and in the corporate culture will be reflected in our overall success and in high production achievements. Today we are participants of a real sporting event for power engineers, as well as the younger generation,» noted Natalia Ozhegina. «I wish high skills, courage and luck to all participants of the Olympics!» 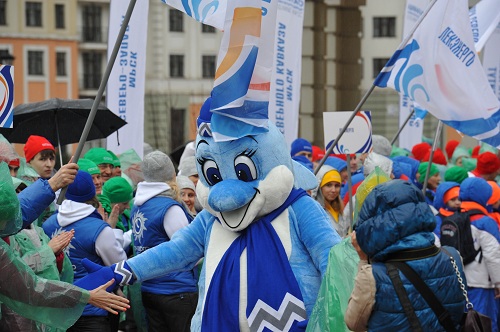 The sports competitions will last from 3 to 5 April at the sites of the Sochi Olympics, coming in 2014. The Olympics program includes competitions in cross-country skiing, shooting, mini-football and cheerleader performances and a friendly game of hockey. The event will also hold the family «Merry Starts», 80 children will take part in game team competitions in the open air with their parents. About 650 people will participate in the sports event: athletes, fans and organizers.

A team of IDGC of Centre arrived in Sochi to participate in the Games. General Director of the Company Oleg Isaev also came to Sochi to cheer the athletes.

«Creating conditions for regular physical activity and sport is one of the priorities of IDGC of Centre. Sports competitions of power engineers are a great opportunity to demonstrate the achievements of athletic performance of our employees,» said the head of the company Oleg Isaev.

In the first and second day of the Olympics a mini-football tournament will take place. IDGC of Centre’s team will meet at the arena of the sports complex «Youth» with teams of MES of East, MOESK and MPEI. At the same time at the ski resort «Rosa Khutor» there will be competitions in shooting. Four shooters from IDGC of Centre’s team will compete for the title of the best. Tomorrow on the second day of the Olympics, skiers will start to fight for first place. The program of these days also includes evening and children’s activities.

The most intense will be the final day of the Olympics — April 5, starting with a mixed skiing and shooting relay and continuing with the «Merry Starts» with the participation of children and adults. A significant event is a friendly match of ice hockey between workers of the electric grid and State Enterprise «Olympstroy». The event will be held at the ice arena in the Olympic Park. Test competitions in winter Olympic sports have regularly been held here, but competitions with amateur athletes will take place for the first time. This will contribute to the development and promotion of physical culture and sports in Russia.

The sports holiday will end up with a ceremony of awarding winners of the Winter Olympics of workers of the electric grid complex and a fantastic ice show.