Power supply of the Kostroma and Yaroslavl regions has been restored 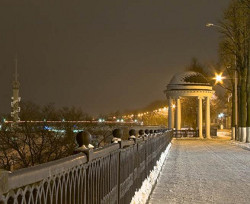 On the night of 4 to 5 February 2013 the Kostroma and Yaroslavl regions were hit by a snow cyclone, accompanied by wet snow and strong gusty winds. This caused a build-up of snow on the wires, resulting in partial power outages in some districts.

Power engineers of IDGC of Centre immediately began restoring the power supply. Operational headquarters were convened, which were coordinating the course of restoration activities. In the first place socially significant facilities were reenergized, and the power supply of remaining consumers was switched to back-up circuits. Already in the first half of the day most of the power supply circuit had been restored to its standard scheme.

82 first responding and repair crews totalling 296 people and 92 special vehicles were involved in the emergency and restoration operations.

Despite the deterioration in the weather, stronger winds in the Kostroma region, the power engineers of IDGC of Centre managed by the evening to restore the power supply of the affected districts. In the Yaroslavl region the work was being performed to full restoration and finished at 08-00 p.m. February 5.