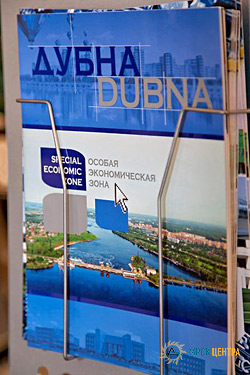 Power engineers of IDGC of Centre completed the work for the grid connection of the Special Economic Zone of Technical and Innovation Type “Dubna” (SEZ).

In 2007, in the city of Dubna, Moscow region, construction of a particularly important innovation of the facility was started — the “Russian Programming Centre” for 30 thousand specialists. Plan for development of SEZ “Dubna”, the customer contract demand of which is 50 MW, includes not only the construction of engineering, transport and innovative structure, but also a program of housing development in the neighborhood, the development of social infrastructure, including the building of kindergartens, schools, clinics, sports and hotels.

To ensure the power supply of the centre was the customer substation 110/10 kV “RPC” of OJSC “Special Economic Zones”. The 110/10 “RPC” is fed from the 110/35/10 “Rainbow” of IDGC of Centre — Tverenergo division with the newly constructed by the branch double-circuit conductor of 110 kV with its length of over 13.5 km.

To be able to transit Tver power engineers of IDGC of Centre implemented a large-scale renovation of the SS “Rainbow”. Thus, at the power facility two new 110 kV bays were installed, equipped with gas-insulated circuit breakers and relay protection and automation based on a new generation of microprocessor devices. Their application will allow to extend the automation functionality, to reduce labour costs and expenses for relay protection operation. General characteristics (reliability, sensitivity, selectivity, speed) of MPD are significantly higher than electromechanical. The devices have lower weight and size, as well as the function of direct recording of emergency processes and events.

At the SS “Rainbow” the 110 kV taps “Diamond-Left”, “Diamond-Right”, Sectionalizer-110 kV were also reconstructed, during which the morally and physically obsolete oil switches were replaced by sulfur hexafluoride, which are reliable in operation throughout their life cycle.