Employees of IDGC of Centre received awards of the Russian President

For labour achievements and many years of diligent work in accordance with the Decree of the Russian President Vladimir Putin two employees of IDGC of Centre were presented with state awards. 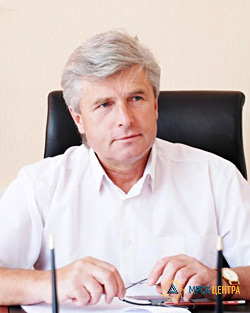 Medal “Order of Merit for Country of the II Degree” was awarded to Head of Human Resources of IDGC of Centre — Kurskenergo division Gennady Demekhin.

Gennady — a power engineer with experience, he has been working at Kurskenergo for almost 40 years. Invaluable experience of the person that has passed the way from an electrician to the head, in-depth knowledge, commitment, future-oriented thinking, diplomacy and the ability to solve complex problems of today contribute to the successful work of Gennady Demekhin as Head of HR Office of IDGC of Centre — Kurskenergo division.

Gennady considers the most important in his work prompt and efficient execution of assigned tasks to his staff, implementation of advanced methods to improve existing forms of work with the staff. Under his leadership, the Kursk branch of IDGC of Centre is implementing a set of measures to attract and retain young professionals, conducting broad career guidance and implementing socially — oriented regulations at all levels.

Gennady Demekhin’s creativity, his responsible attitude and sincere devotion to his chosen profession many times were distinguished with industry awards. For his contribution to the development of the power industry Gennady was awarded the honorary title “Honoured Power Engineer of the Russian Federation”, and “Honoured Worker of the fuel and energy complex”. In 2011, as part of the regional round of the All-Russian contest Gennady Demekhin was recognized “Best Manager of the structural unit”. 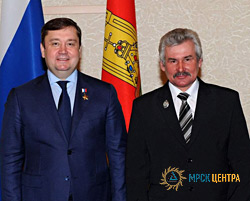 The honorary title “Honoured Power Engineer of the Russian Federation” was awarded to Chief of Firovsky Distribution Zone of IDGC of Centre — Tverenergo division Victor Ipatov. The state award was handed over to the employee by the Tver region Governor Andrey Shevelev.

“Your extraordinary professionalism, managerial talent and deep knowledge will continue to be a key to success for the benefit of the Tver region and all Russia,” — underlined Governor.

Victor Ipatov has come a long way in his career since 1988 from an electrician, operating distribution networks to Chief of Firovsky Distribution Zone of Tverenergo. Under the direction of Victor for the period large amount of work on reconstruction, major repair and maintenance of electrical installations in Firovsky Distribution Zone was performed. Quality and timeliness of these works increased reliability, security and safety of power supply to socially significant facilities and industrial enterprises of the region.

Due to the organizational skills of Victor Ipatov in Firovsky district the implementation of new equipment was successfully realized: the package transformer substations “Luke-2”, “Gardener”, “Sawmill”, “B.Eskino cottages”, and “B.Eskino sewage pumping station” were constructed and commissioned. At present, work to install an automated electricity metering system is under way. For many years of hard work in the energy sector Victor Ipatov was awarded the Diploma of Merit of Governor of the Tver region, in 2004 he was award a commendation from the Ministry of Industry and Energy of the Russian Federation, and in 2007 he was awarded the Diploma Merit of RAO “UES of Russia”.