Specialists of IDGC of Centre took part in the tests of a 10/0.4 kV pole-mounted transformer substation 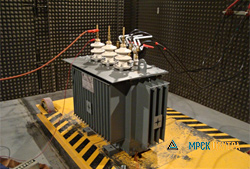 As part of IDGC of Centre’s innovation project implementation to construct distribution networks with the use of pole-mounted transformer substations the company’s specialists were present at the acceptance tests of a prototype of a 10/0.4 kV pole-mounted transformer substation, connected to mains under a simplified scheme (without a switching device on the high voltage side).

The tests took place in a certified laboratory at the factory at a pre-approved program and also included checking the level of partial discharge and dielectric strength of transformer oil, insulation resistance of the windings, voltage and short-circuit losses, no-load losses, testing the transformer tank for leaks and non-excitation type switching devices. The acceptance committee concluded that the tests were a success: the new transformer matches the specifications.

The presented for testing transformer for the pole-mounted transformer substation has a number of advantages over those used transformers at present in the networks of IDGC of Centre: the design of its attachment has been modified and improved, the area of the cover of the corrugated tank has been increased to locate the lightning protection, winding insulation has been reinforced, resistance of the transformer to short-circuit has been increased and its capability to be used in the scheme without a protective device on the 10 kV side has been added.

In the nearest future the prototype of a 10/0.4 kV pole-mounted transformer substation will be installed on one of the pilot sites — in Belgorodenergo.

Please, be reminded that from 2010 IDGC of Centre as an innovative project has been implementing the “Concept of constructing distribution networks of 0.4-10kV”. Completely new construction of electrical networks involves unbundling of feeding centres and an extensive 0.4 kV network upgrade with a fixed power load, network construction using pole-mounted transformer substations and installation of voltage boosters on the lines of 0.4 kV. The implementation of the new concept can reduce the length of low-voltage lines and thus decrease the electricity transmission losses, improve reliability and quality of electricity supply, as well as safety for the population.

The new concept meets the principles of circuit design as simple as possible for improving the reliability of the network elements through the use of a new generation of highly reliable materials and equipment.