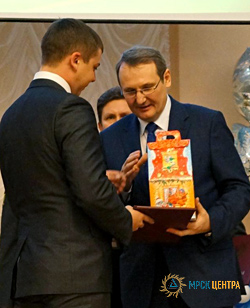 Engineer of Yakovlevsky Distribution Zone of IDGC of Centre — Belgorodenergo division Vitaly Yakovlev became a prize winner the All-Russian competition of youth author’s projects for socio-economic development of the Russian regions “My Country — My Russia”.

The project “Development of electricity metering systems of a modular (block) type”, presented by the young specialist, passed successfully the qualifying round at the regional level and following the results of expert judgment and review at the federal level finished second in one of the 16 categories — “Projects aimed at development and implementation of energy saving technologies in the Russian regions and municipalities”.

Expert Council, consisting of representatives of the federal authorities, NGOs, academia and business structures, took into account the relevance and novelty of the project, and the possibility of its practical implementation. Special attention was paid by the members of the Council to the importance of the project in implementing the Concept of long-term socio-economic development of Russia until 2020, and existence in it of mechanisms of social and economic development of a particular area (village, city, and region).

As part of his project Vitaly Yakovlev introduced the idea of ​​a multifunctional device, which would be at the request of the consumer with additional modules transformed from an ordinary counter. The device could be combined, for example, with the emergency call for emergency services, a payment terminal for housing services, a terminal for prepaid electricity use (when changes are made to existing legislation), a module for measuring the grid operation parameters and reading profiles.

According to the engineer, originally the device can be supplied as standard, and required functions and modules — to provide telecommunications services (Internet, phone, TV), and the collection and transmission of information from metering devices of all energy resources, etc. — can be added as needed.

“The project has prospects to be implemented in the service area of Belgorodenergo both in terms of the implementation of targeted programs to modernize the metering systems, and in terms of value added services for the installation of meters for the population, — explains Vitaly’s mentor, leading engineer of IDGC of Centre — Belgorodenergo division Vladislav Stotsky. — Modular meters are quite competitive compared to currently used peers and have a number of advantages. In addition, the proposed technology will facilitate the implementation of Federal Law # 261 ‘On energy saving ...’ in terms of equipping consumers with metering devices of energy resources.”

The All-Russian competition of youth author’s projects “My Country — My Russia” is conducted to attract young people to participate in the development of Russian regions, towns and villages. It is organized by the All-Russian Union of Public Associations “Youth social and economic initiatives”, together with the Interregional public organization “Centre for Social and Economic Initiatives “My Fatherland” and with the support of the State Duma’s Committees on education, federal form and local government issues, the Ministry of Education and Science of the Russian Federation, and the Federal Agency for Youth Affairs. Young people aged 14 to 25 have the right to participate in the competition. The authors of the best works are nominated as candidates for the award for support of talented young people in the framework of the priority national project “Education”. Best projects receive information support and guidance for the practical implementation in regions and municipalities.