Dmitry Gudzhoyan participated in All-Russian meeting to prepare for winter 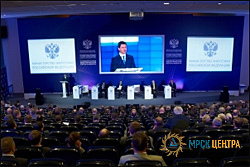 General Director of IDGC of Centre Dmitry Gudzhoyan took part in the All-Russian meeting of the Ministry of Energy of the Russian Federation “On the preparation of the electric power industry for the autumn and winter period of  and the development of markets for electricity and power”. The event was also attended by the heads of energy companies of the country and headquarters of security of electricity supply in regions of Russia.

Opening the meeting, Head of Ministry of Energy of Russia Alexander Novak generally rated the preparations of energy entities as satisfactory, including the electric grid to operate through the autumn-winter period. According to him, the heating season is the most important test for the power industry.

Assessing the progress of preparing the power grid complex for winter, Alexander Novak recalled the Resolution of Russian President Vladimir Putin to establish a management company in the power sector, with the result that assumes substantial improvement of the management of the grid economy of the country, implementation of a single technical policy and synchronization of investment activities.

The main priorities in the grid complex operation of the country for the winter period of  Russian Energy Minister Alexander Novak called to ensure reliability, reduce time for liquidation of consequences of natural disasters, and increase the availability of networks for consumers.

IDGC of Centre a month earlier — by 15 October — finished all preparations for winter and promptly received its Certificate of readiness for the autumn-winter period. This year the repair program of IDGC of Centre is 2 times higher than the last year’s volume and its costs amounted to over 1.5 billion. The company completed an unprecedented amount of ROW clearing expansion — more than 14,600 hectares.

In the logic of the Resolution of the President of the Russian Federation on the integration of transmission and distribution grid complexes IDGC of Centre paid special attention in preparation for the winter precisely to the establishment of effective cooperation with enterprises of MES of FGC UES, located in the regions of the service area of IDGC of Centre. Exchange of information on the availability and provision of emergency personnel was improved, the operational headquarters were synchronized, joint exercises were held, and responsiveness to emergency situations was increased. The effectiveness of such interaction was tested in the real world: October in the Smolensk region with joint actions of repair crews of IDGC of Centre and FGC power supply was quickly restored; in the Yaroslavl region power engineers of Yarenergo and Yaroslavl EMES of FGC UES together replaced a complex broken ground wire of the 220kV overhead line Uglich-Vega, which supplies electricity to the water utility MUP “Water canal” in the city of Uglich, without interrupting supply of consumers; in the Tambov region thanks to the actions of power engineers of Upper Don EMES, who forwarded promptly to the emergency restoration site a tractor truck “Ural” and a truck-mounted crane with increased mobility, the specialists of Tambovenergo were able for a few hours to put into operation the 110 kV overhead line Michurinskaya-Khmelevskaya.

One of the main objectives, pursued by the energy sector in the run-up, was the goal to reduce response time to a failure down to two hours. As part of this, IDGC of Centre signed new agreements with organizations according to which the company will be able to attract an additional provision in the form of 40 special vehicles, including small aircrafts, and more than 120 staff, crews of high mobility. Fleet of vehicles was significantly renewed and modernized, and equipped with GLONASS, the creation of additional regional bases of emergency reserve is under way. In preparation for the autumn-winter period in several branches implemented an innovative project for the implementation of grid management and emergency response (DMS/OMS System), which allows to respond more quickly to emergencies caused by weather conditions.