In IDGC of Centre works out interaction in emergency response 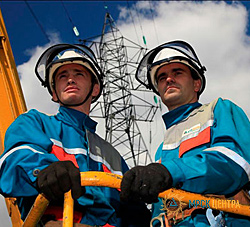 IDGC of Centre continues actively preparing for winter. The company notes the particular importance of the further consolidation of the actions of all electric grid companies and other enterprises in the regions involved in the operation through peak loads.

Consolidation involves the creation of a common information base of emergency reserve, which may be involved in the elimination of emergency situations, the general scheme of operation of power facilities and the rules of attraction of staff for restoration. Now between IDGC of Centre and enterprises of FGC UES in all 11 regions there are agreements on cooperation for the prevention and elimination of emergency situations at power facilities, and operational data exchange is established, joint operational headquarters are held, unified analysis data display of emergency reserve is implemented. Under the agreements joint exercises are conducted to work out interaction with emergency response at low temperatures. During training skills are practiced to take operational decisions in a limited time, the actual availability of operating personnel to restore power within two hours is checked — such a reduced period of liquidation of an outage was identified by Russian President Vladimir Putin during his meeting with Chairman of the Management Board of FGC UES Oleg Budargin. In the Bryansk region experts of IDGC of Centre — Bryanskenergo division and Bryansk enterprise MES (BTGC) of FGC UES took part in the training. According to the training scenario on the weekend at 10 am with an air temperature 0 — 3 degrees with wind gusts of 18 m/s out some equipment of the substations “Michurinskaya” and “Bryansk” failed. Operators outlined a detailed plan of emergency response efforts. The management team of the headquarters of Bryanskenergo was notified about the situation. Chief of the headquarters announced the introduction of a special operation: emergency supplies were specified, and readiness of mobile crews was checked. Redundant power supply sources of electricity were turned on, joint action plan was updated with BTGC, local authorities, and contractors. Maintenance crews of the branch immediately started restoring the failed power facilities. Restoring power was conducted jointly with power engineers of FGC UES. A temporary information centre was organized. Information on the planned restoration time of consumers was transmitted to the Contact Centre of IDGC of Centre. The emergency situation was eliminated for two hours. The training was supervised by Deputy Chief Engineer of FGC UES Vladimir Dickoy and Deputy General Director for Technical Issues — Chief Engineer of IDGC of Centre Sergey Shumakher. They highly appreciated the joint efforts of Bryanskenergo and BTGC to eliminate the simulated emergency.

Exercises were also held in the Smolensk region. It was attended by experts of Smolenskenergo, Bryansk enterprise MES of FGC UES, Smolensk TCC of SO UES, representatives of executive power, EMERCOM of Russia in the Smolensk region, MSO “Civil Defense and Emergencies Office of Smolensk”. The exercises developed a mechanism of interaction with contractors, which signed agreements on cooperation in emergency response. Data on the readiness of the forces and means of contractors to perform, if necessary, rescue and restoration operations was checked.