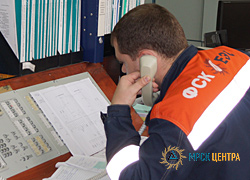 In preparation for the autumn-winter in Smolensk held joint exercises branches IDGC of Centre — Smolenskenergo division, FGC UES “Bryansk enterprise MES”, Smolensk TCC of SO UES, executive authorities of the city of Smolensk, EMERCOM of Russia in the Smolensk region, MGI “Civil Defense and Emergencies Office of Smolensk”. The purpose of the training — to work out the interaction at emergency situations, major technological disturbances associated with the threat of a power failure at low temperatures. Contractors also participated in the exercises, which had signed framework agreements on the elimination of complex technological violations.

At the first stage of the exercises the instruction was given to operators on duty in the GCC, who are to clearly present all of actions when information is received about the threat of an emergency and letting the management team of the headquarters of Smolenskenergo know.

The exercises developed a mechanism of interaction with contractors, which had signed agreements on cooperation in interaction at elimination of emergencies. Data on the readiness of the forces and means of contractors to perform, if necessary, rescue and restoration operations was updated.

At the proper time communications were prepared, the management system and alerting order was well-adjusted, and intercom and video support was organized.

It should be noted that in the course of the training all necessary measures to prevent the possibility of accidents, incidents, disruption of production and other negative factors were taken. With all the personnel involved in the exercise, additional briefings on safety measures were conducted.