The Feat of Heroes of the Fatherland will not be forgetten!

The historical and memorial event “Victory Banner Relay” finished in the branches of IDGC of Centre. The event, initiated by IDGC Holding, has been held in the service area of IDGC of Centre for the third year in a row.

This year the start of the relay was given in early May in the village of Idritsa in the Pskov region, where the famous of Order of Kutuzov of II degree Infantry Division was formed, whose attack flag was hoisted by M.A. Egorov and M.V. Kantaria atop the Reichstag building in Berlin. A solemn ceremony of handing over copies of the Victory Banner to chairmen of Veterans’ Boards and youth leaders of IDGC/DGC was just held there. Deputy Chairman of the Board of Veterans of IDGC of Centre Viktor Frolov and Deputy Chairman of the Youth Council of the Company Alexey Magon, receiving the Banners, noted the special heartfelt atmosphere of the action: “Holding a copy of the symbol of the Great Victory, one feels imbued with a deep sense of gratitude to the heroes of the Great Patriotic War, as well as a deep sense of responsibility for preserving the memory of the Victory price in the millions of lives”.

For nearly two months of the Victory Banner paraded through 11 regions of Central Russia, in which IDGC of Centre operates. In honour of the Flag there were ceremonies in the cities, meetings of veterans and students, and “the lessons of the peace”. Representatives of governments, public organizations, Voluntary Association for Assistance to Army, Aviation and Fleet, “Opora Russia”, “Business Russia” participated in all events together with the staff of IDGC of Centre.

In Tambov the Victory Banner was carried over the streets of the city at the airplane AN-2 by pilots of the sports club of the Tambov branch of Voluntary Association for Assistance to Army, Aviation and Fleet of Russia. 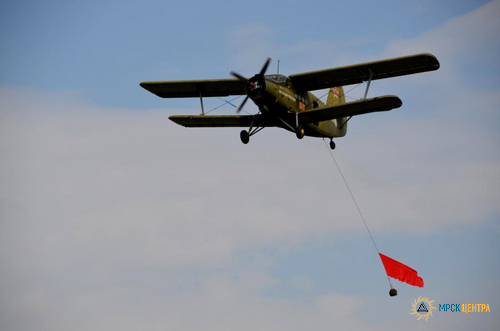 Then the Banner was handed over to the Tambov Cadet Corps. 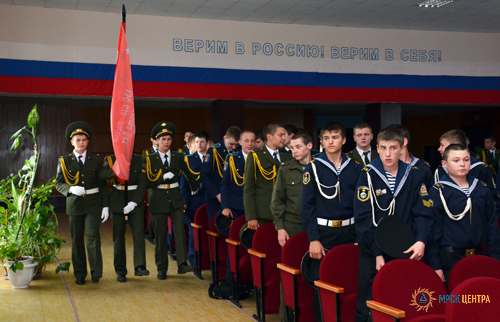 In the Smolensk region, in Temkinsky district, the transfer of the Victory Banner was together with the opening of a memorial plaque dedicated to the Heroes of the Soviet Union — the natives of the Smolensk land. Representatives of the Councils to work with the youth of IDGC of Centre — Bryanskenergo division and Kurskenergo division honoured the Victory Banner at the Partisan meadow near the village of Smelizh of Suzemsky district in the Bryansk region. There was a solemn meeting held. In the Lipetsk region, on the “High Point Cucumber” of Volovsky district, in places where heavy fighting took place between December 1941 and January 1943, and where more than five thousand Soviet soldiers were killed, members of Districts of Electrical Networks of Lipetskenergo passed with the Banner the way in 1418 steps and hoisted it at the memorial complex “Memory”.

June 22, the start day of the Great Patriotic War, on the All-Russian Day of Remembrance and Mourning, the historical and memorial event “Victory Banner Relay” finished its march. Replicas of the Victory Banner were placed for eternal storage in all 278 Districts of Electrical Networks IDGC of Centre.

In Voronezh the “Night of memory” took place. Here, on Chizhovsky place of arms a torchlight procession to the Victory Square was held. It was attended by employees of Voronezhenergo, veterans, residents of the city. Then, Chairman of the Youth Council of the branch Dmitry Dorovskikh and Chairman of Veterans’ Board of IDGC of Centre Vladimir Skrynnikov solemnly handed over copies of the Victory Banner to representatives of all 33 Districts of Electrical Networks of IDGC of Centre — Voronezhenergo division. The place of the final gala event “Victory Banner Relay” in the Lipetsk region was the city of Yelets — City of Military Glory. The guests of honour of the event were Chairman of the Yeletsk City Veterans’ Board Alexander Burtsev, members of the labour front and war veterans, representatives of the Veterans’ Board of Lipetskenergo. Young professionals of DENs took the banners from the hands of veterans, having continued the watch of historical memory. 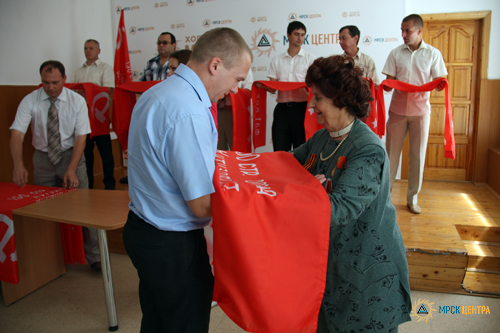 In every District of Electrical Networks of IDGC of Centre — Yarenergo division a copy of the military relic was placed that keeps the memory of the exploits of the Russian people in the fight against fascism. On the occasion of transferring a copy of the Victory Banner a meeting was held with the participation of staff, veterans of power industry and representatives of regional administrations. Chiefs of DENs told employees about the history and symbolism of the legendary flag, and veterans shared their memories of the war. 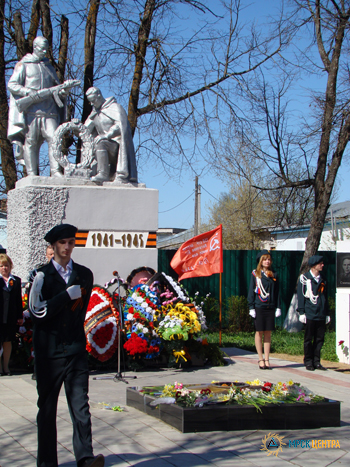 Veterans of Great Patriotic War — employees of Tverenergo — also presented a copy of the Victory Banner to representatives of Districts of Electrical Networks. At the event a lot was recalled about the work of the Tver power system during Member of the Veterans’ Board of the branch Alexey Khazov shared his memories of how during the occupation of the city of Kalinin in the Tver region power engineers were hiding the equipment in the Volga River, so the fascists could not get it. But just a week after its liberation from Nazi invaders the electricity supply was restored. 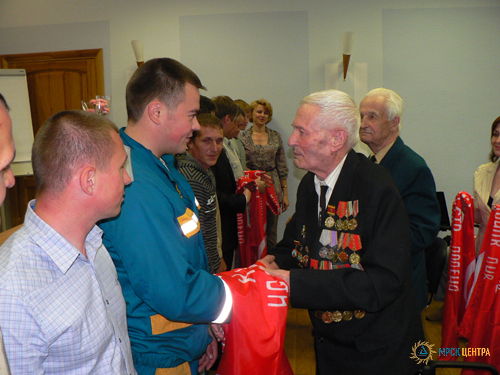 27 Districts of Electrical Networks of IDGC of Centre — Kostromaenergo division took the relic of the Victory with gratitude and respect for eternal storage. Members of the Youth Council, representatives of municipal administrations were invited to the ceremony. Kids of the branch’s employees, groups of cities and districts performed their creative shows. “We have to keep holy the memory of those who defended the freedom of our Motherland in World War II. Today we pay homage and respect to all the fallen and living heroes. Let the symbol of courage and heroism — the Banner of Victory — is stored in each district of our region and unites generations with the memory of the great feat of our fathers and grandfathers, their courage, fortitude and devotion to the Fatherland”, — the branch’s director Alexander Glebov stressed in his speech. 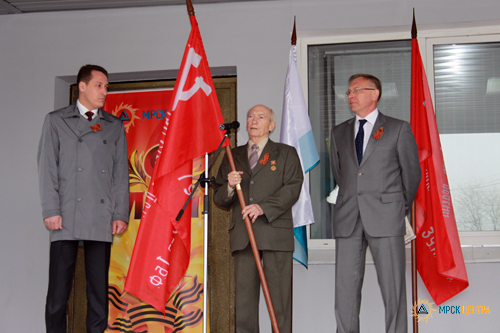 In the Belgorod region copies of the Banner of Victory were already in May 2012 received by each DEN of Belgorodenergo. On June 22, the patriotic rally ended at the Soldier of Glory memorial in the town of Alexeyevka. Power engineers of Alexeyevsky DEN of IDGC of Centre — Belgorodenergo division gave an exact copy of the sacred symbol for storage to the Alexeyevsky local history museum, where it will be kept until May 9, 2013.

The head of the town administration Alexey Gorbatenko stressed: “We are mindful of those whom we owe our happiness of peaceful life, and instruct our children to remember it. The Victory Banner demonstrates the continuity of generations and the inextricable link with the heroic past of our country. This is a great symbol of courage and patriotism of Russians”. The event was attended by pupils of the Cadet School. Veteran of World War II Anna Surina addressed to them with heartfelt words. “I went through the war and signed on the wall of the ruined Reichstag. I wish you much good, and most importantly — that you will never see the war, which our generation went through. Let this banner will a guarantee that you will never allow any war. Take care of yourselves and your beloved. Our Motherland is now in your hands”. 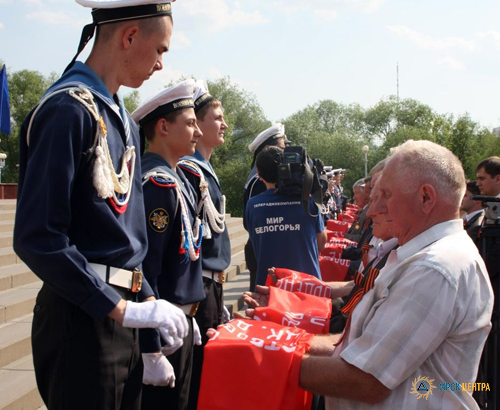 Many young people participated in the ceremony of handing over copies of the Victory Banner to Chief Engineers of DENs of Smolenskenergo. To strengthen the patriotic traditions and relations cadets of the Military Academy of Air Defense of the Armed Forces were invited. One copy was given to the Smolensk Museum of the Great Patriotic War and took its rightful place in the Flag Hall among the banners of Smolensk regiments. For this Smolensk power engineers received special thanks from the leadership of the city and museum administration. 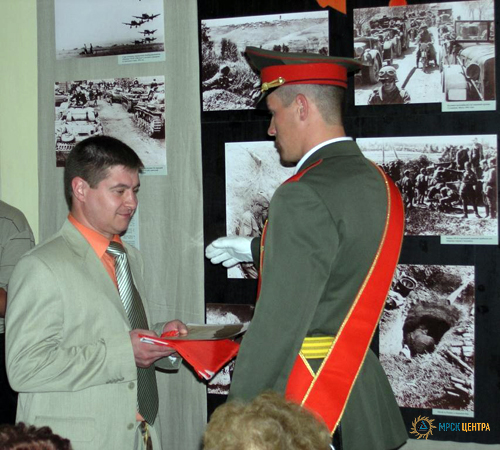 On the territory of the Krivtsovsky memorial complex, located in Bolkhovsky district of ​​the Orel region, Director of IDGC of Centre — Orelenergo division Alexander Letyagin also passed 24 copies of the legendary Victory Banner for eternal storage to all Districts of Electrical Networks of the branch. Vyacheslav Zotov, Deputy Chairman of a regional branch of the Russian Voluntary Association for Assistance to Army, Aviation and Fleet in the Kursk region, who took part in the event of transferring copies of the Banner to DEN managers of Kurskenergo, stressed: “I am particularly happy to note that power engineers, who are famous for their labour traditions, dynasties, made a major mission — patriotic education of young people. You can count on our help and support of all patriotic endeavors”.

The Victory Banner Relay is over, but events in DEN, held in honour of the Victory Banner, will continue throughout the year. Their main goal, according to Director of Information Policy and Communications of IDGC Holding Alexander Uzhanov, — is the desire to make just DENs as centres of historical and commemorative work in the electricity distribution sector. It is not accidentally that the copies of the Banner of Victory will be assigned to them and left there for permanent storage.

There are new things ahead: this year at the initiative of IDGC Holding all operating companies, branches, production offices and DENs special forms and historical references are introduced that define a single standard of historical and archival work in local offices. In addition, the proposal for inclusion in created everywhere Boards of museums of members of the Youth Council, Veterans’ Boards of companies of IDGC Holding is being worked out, as well as specialist of local history museums and fixing their membership with special orders.