Let’s preserve the memory of heroes

IDGC of Centre continues to participate in the international relay of the memory and gratitude “Homeland of the feat — homeland of the hero”. IDGC Holding is the initiator of the large-scale patriotic action, which is held for the second year in a row. The action is designed not only to honour the brave heroes who were awarded the highest honour of the Fatherland — the Gold Star of Hero of the Soviet Union, but also to promote long-term cooperation between the cities, in which the heroic deeds of the defense and liberation from Nazi aggression took place, and the settlements, where the heroes were born and raised.

In early May, in the Bryansk and Smolensk regions important events were held within this historical and commemorative action. 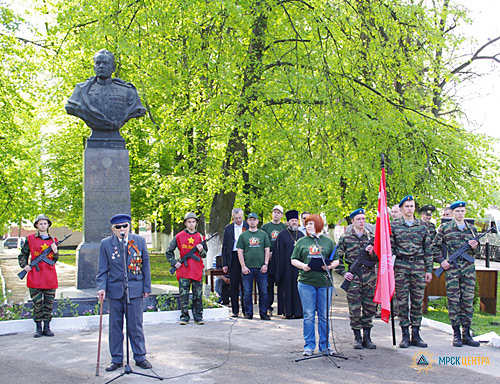 In Novozybkovsky district of the Bryansk region the action brought together the youth of three branches of IDGC of Centre — Bryanskenergo, Kurskenergo and Smolenskenergo. In the city of Novozybkov representatives of the youth councils laid Alley of Memory in honour of white cedars to Twice Hero of the Soviet Union David A. Dragunsky. From Smolensk and Kursk — the places where fighting took place, General Dragunsky, as well as from the historic homeland of the hero — village of Svyatsk — the participants of the action brought a handful of earth to the Alley of Memory.

Freeing the land from the fascist invaders, Mr. Dragunsky went from Smolensk to Berlin. In the battles of World War II tankers, inspired by the example of their commander, showed exceptional courage and heroism in the main areas of military operations, including the most difficult battles at Smolensk and Kursk land. 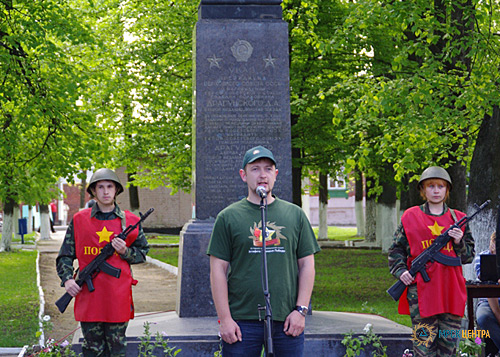 In honour of the hero a solemn meeting was held in the city of Novozybkov. Residents of the city came to honour the memory of General D.A Dragunsky. Deputy Head of the Administration Andrey Nebylitsa, pupils and young power engineers addressed to the veterans with words of gratitude. They spoke about the work carried out by branches of IDGC of Centre to perpetuate the memory of heroes of the Great Patriotic War, assured that the memory of the deeds committed in fighting the fascist invaders, will live in the hearts of the younger generation, thanked the veterans for the victory and congratulated all the present on the occasion. The participants paid tribute to the fallen soldiers with a minute’s silence.

Power engineers of IDGC of Centre also initiated the naming of Novozybkov school # 1 after David Dragunsky. During the celebrations the Youth Councils of branches IDGC of Centre — Bryanskenergo, Kurskenergo and Smolenskenergo signed a memorandum of cooperation, which confirmed the intention to establish long-term relationships in the information and cultural and educational fields in order to preserve the historical memory, national, cultural and spiritual traditions, to perpetuate the memory of the heroes of World War II. Young specialists of the company agreed to exchange information on search work, conduct joint military-patriotic events, etc. In the Smolensk region, in the territory of Temkinsky district in the village of Bekrino, in the framework of “Homeland of the feat — homeland of the hero”, power engineers of IDGC of Centre unveiled a plaque dedicated to the Heroes of the Soviet Union, the natives of this land. Georgy Gromov, Viktor Mironov, Vasily Filatenkov and Evgraf Ryzhov — these heroes’ names were inscribed on a marble slab, which now hangs on the wall of a local school. 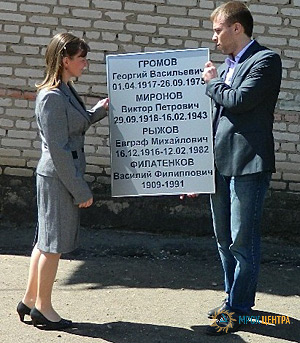 Director of Bekrinsky secondary school Lyubov Petrovs stressed: “We are very proud that our fellow heroes are remembered. It is important that our children are well aware of the deeds of their countrymen, who made a great contribution to the victory, and never forget about it”.

Georgy V. Gromov and Viktor P. Mironov — fighter pilots, they committed their heroic deeds in the territory of the Murmansk region. On the account of each of them — at least 20 shot down enemy aircrafts.

Currently there are negotiations between the administrations of Temkinsky district and the city of Murmansk on the conclusion of an agreement to perpetuate the memory of the heroes.