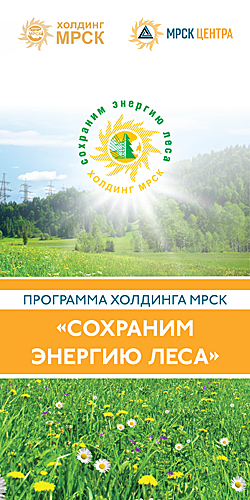 The All-Russian campaign “Electricity Distribution Complex — for the environment” (“Save energy of forests”) in the framework of the traditional communication Target Program of IDGC Holding and operating companies was started in March this year. IDGC of Centre got actively involved in the implementation of this program, continuing the last year’s tree planting activities.

In preparation for the extensive work to restore the natural balance, the branches of IDGC of Centre are entering into agreements with the relevant departments of the regions in order to improve the interaction between power engineers and environmental experts. So, an agreement on cooperation has been signed between IDGC of Centre — Orelenergo division and the Forest Administration of the Orel region. The document was signed by branch director Alexander Letyagin and Head of the Forest Administration of the region Evgeny Kazakov.

The main purpose of the Agreement is the parties’ cooperation in the field of forest management while operating overhead power lines and other line facilities. The Agreement is aimed at ensuring the safety of citizens and creation of necessary conditions for the operation of facilities and power plants with minimum impact on forest resources and the environment.

It should be emphasized that this document is relevant not only for the power industry, but also for employees of the Regional Forest Administration, as there are now parts of the forest fund, which power lines owned by the branch go through, and control over the use of forests for construction, reconstruction and maintenance of the lines is performed by the Forest Administration of the Orel region.

The Agreement has also been signed between the Forestry Department of the Kostroma region and IDGC of Centre — Kostromaenergo division. It pays particular attention to compensation for environmental losses, planting of forest plantations in areas of forest land in the region as part of the All-Russian ecological campaign “Save energy of forests”. The Kostroma power engineers of IDGC of Centre were also engaged in the restoration of green spaces last year: about 700 saplings were planted in the Kostroma region all 27 Districts of Electrical Networks of the branch participated in the campaign.

The environmental Program “Electricity Distribution Complex — for the environment” is intended not only to restore the broken by anomalous phenomena or by human natural balance of Russia, but also to unite the most active part of employees of the electric distribution grid sector — young people.

Please, be reminded that in 2011 within the framework of this program IDGC Holding and its subsidiaries planted 1 million trees and seedlings of coniferous and deciduous species and tens of thousands of shrubs. Last year the staff of IDGC of Centre planted in the regions where the Company operates and in the Moscow region more than 10,000 saplings of trees and shrubs, and in 2012 power engineers of the Company will put more than 40,000 seedlings.