General Director of IDGC of Centre Dmitry Gudzhoyan was awarded a diploma of the X Moscow International Energy Forum “Fuel and Energy Complex of Russia in XXI century”, held 4 — 7 April in Moscow.

Within the forum the annual exhibition “Fuel and Energy Complex of Russia in XXI century” was opened. The exhibition traditionally presents regional investment projects and achievements of Russian and international companies in the sphere of fuel and energy complex. The exhibition features a high level of representation of visitors and the availability of official exhibitions of regions. Traditionally, the booths of exhibitors are attended by first persons of Russian and world fuel and energy complex, representatives of federal and regional legislative and executive branches of government, top managers of the world leaders in energy, leading experts from NGOs and scientific organizations.

IDGC of Centre presented its activities at the joint booth of IDGC Holding and also presented energy conservation and energy efficiency projects developed by the Company. 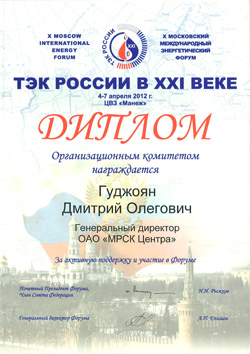