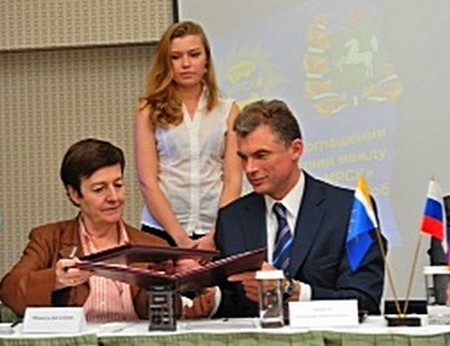 JSC “IDGC Holding” and ERDF are strategic partners since March 2010, when the heads of the companies concluded an Agreement on cooperation in the frame of the state visit of the President of the RF to France. Thus, a first step on extension of the cooperation is made.

The parties agreed to cooperate in research and educative areas, to accomplish joint innovation project development in energy efficiency, reduction of losses, increase of power grid equipment reliability. A special priority was given to joint projects on provision of high-skilled staff to distribution grid companies. This trend is closely related with necessity to increase a status of power grid engineer, to involve young high-skilled professionals into Russian electric power industry.

In order to have an effective cooperation, the parties agreed to meet their top-managers regularly and create working and expert teams for realization of particular projects and offers.

JSC “IDGC Holding” expressed readiness to assist TPU in working out of educative programs and specialized training courses. If appropriate, JSC “IDGC Holding” and its subsidiary JSC “TRK” are ready to form orders on scientific research in issues challenging for electricity grid industry. Particular areas — as involvement of TPU Ph.D. candidates and talented students into scientific researches for IDGC Holding, and trainings for TPU students and teachers in IDGC Holding’s subsidiaries.

High-skilled staff of IDGC Holding, among whom there are several hundred of ScD and PhD (third part of them work in Scientific Department “Energy Safety Problems”), will frequently visit student classes as lectors describing practical grid activities.

The French party is ready to cooperate in range of problems in distribution grids, in particular innovative technologies, smart grid, rise of energy efficiency, losses cut-off and realization of target problem on young talented specialists support.

Supposed to organize mutual trainings for students and teachers. Herein, there will be used a partnership between ERDF and French high schools. It is considered to perform joint international researches in distribution grids, including G3 PLC Alliance.

Creation of Russian-French research and educational tandems in order to mutual technological penetration of IDGC Holding and ERDF and settlement of strategic cooperation among Russian and French young specialists is a very prospective trend in the partnership between Russia and France.

Under the signed Agreement, for instance, it is planning to work out the establishment of mutual young scientific team: one creative couple from JSC “IDGC Holding” and TPU, another creative couple from ERDF and one of the French universities. Russian and French young teachers, PhDs and students will take an opportunity to find solutions of relevant issues targeted towards modernization of distributional power supply network. These creative teams can take part in the Second National Youth Contest of high-tech innovative ideas and projects “Future Energy” which starts on September 1st, 2012 (Day of Knowledge).

We should make it clear that young scientists from Tomsk have already had the experience of participation in the First Contest. Teachers, candidates and students of Electric Power Systems Department headed by Anton Prohorov, PhD of technical Sciences, came up with a research paper about pilot models construction of mobile hardware and software complex for Protective Relays Application Guide examination, investigation and adjustment in December 2011. According to JSC “IDGC Holding” expert evaluation, this upgraded research paper can be an efficient base for further mutual cooperation between Russian and French teams.

“The signed Agreement is very important for us” — noticed Nikolay Shvets, General Director of JSC “IDGC Holding”. "This event is a great achievement and characteristic result of a relationship extension between leading country universities, state corporations and international companies, which is a part of our countries’ politics. JSC “IDGC Holding” is connecting with 58 university partners, which are located in 43 constituent entities of the Russian Federation. As is known, since March 1st, 2012 in this region ERDF Vostok, a daughter company of ERDF, started operations as a sole executive body under our subsidiary JSC “TRK”. Thus, we are getting proper representative testing site for processing of composite integrated decisions in competence of JSC “IDGC Holding”, ERDF and TPU, one of the oldest Russian technical universities.

In return, Peter Chubic, Rector of TPU, underlined that successful realization of the Agreement will be supported by the exist Special Economic Zone of technical implemental type together with the fact that within one hundred years of University existence it was created a forceful school on training of electrical engineers. The Rector marked: “I am sure such an experience with mutual efforts may and must be expanded on the whole Russian distribution grid complex and be transmitted to the same French infrastructure”. According to Mr. Chubic, there is a positive experience of international cooperation. The University has signed agreements on cooperation in the field of education and scientific research with 130 universities from 30 countries. “And we target to make our University as an international scientific research and training center. That’s why entering into this Agreement is a very significant step for us” said the Rector.

French colleague Michelle Bellon, CEO of ERDF, expressed a readiness to a significant cooperation with Russian partners on all the directions stipulated in the Agreement.

A key-not of the Russian-French cooperation may be an expression pronounced in Benue Hall of Astoria Hotel where the Agreement was signed, and which may be related to each of the parties: “We’ve got something to be shown and exchanged to each other. At the same time we’re ready to learn and adopt the best from experts of the friendly country”.

JSC IDGC Holding, a company operating in the electricity sector of the Russian Federation, comprises interregional and regional distribution grid companies (IDGCs/RDGCs), research and development institutes, design and construction institutes, and construction and sales entities. 97 subsidiaries of IDGCs/RDGCs are based in 69 constituent entities of the Russian Federation.

ERDF is one of the leading grid companies in France. Shares of ERDF (100%) are held by EDF (85% of shares belong to the state). The operational area of ERDF covers 95% of distribution grids of MV and LV with a total spread of networks about 1,274 million kilometers. The company serve 33,6 million clients.

Tomsk Polytechnic University is the oldest technical HEI in Asian part of Russia which was built in 1896. According to a rating of the Russian Ministry of Education, TPU is one of Russian HEI top ten. TPU consists of 11 educational institutes, 3 faculties, 98 departments. 325 DSc/professors and 1340 PhD/docents are working in TPU nowadays. Total amount of students is more than 22 thousand. Share of foreign citizens in the total amount is 11,7%. During one hundred years about 150 thousand specialists were graduated from the University.