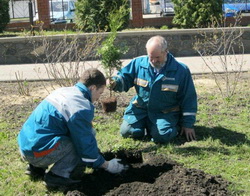 Today, May 17, in all branches of IDGC of Centre and the Executive Office the traditional annual event was held on the landing of green space «Save the energy of the forest».

The campaign, launched three years ago, has already proved its social importance and relevance among the population. IDGC of Centre’s staff and their families, together with representatives of most of the general public, including veterans, students, educators, clergy, for 2011 and 2012 planted more than 70,000 trees and shrubs, laid out new avenues of power engineers, squares and parks. Many planted trees got personal names, close to the seedlings there are nameplates installed with the specialists who planted them.

In 2013, the large-scale action, aimed at restoring the natural balance, broken by climate anomalies, has gathered more than 4 thousand people, more than 16,500 seedlings of trees and shrubs have been planted.

In Moscow, the Executive Office’s employees planted maples, birch and apple trees in the premises of city hospital # 11. «The hospital’s management is deeply grateful to all the participants of the today’s action,» stressed the deputy chief medical officer Alexey Butyrev. «I’m sure the avenues that you have planted today will delight our patients.» 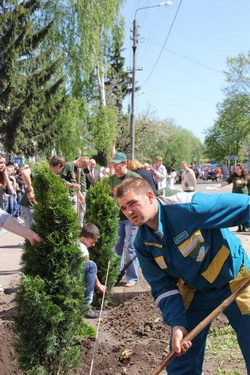 In the Belgorod region almost all employees of IDGC of Centre — Belgorodenrego division participated in the action — more than 2 thousand people, they planted about 11,000 plants in all districts of the region.

The Youth Council in cooperation with the Veterans’ Council expanded the Alley of Veterans at the 110 kV substation «May» in the city of Belgorod, having planted there birch and ball maple trees. New trees were added in the linden avenue of veterans in Valuiky and in the park named after the first chief of the Distribution Zone A. Lokka in Chernyanka. In Rakitnoye in the area of the square named after Full Cavalier of the Order of Glory Alexander S. Pisklov, employees of the Distribution Zone planted arborvitae and decorated the premises with flowers. The person marked Square was opened in April last year in memory of the renowned warrior and man standing at the source of energy in Rakityansky district. Staff of Alexeevsky Distribution Zone together with inmates of Alexeevsky correctional boarding school decorated the school grounds with fruit trees and shrubs. The inmates will take care of the seedlings themselves.

In the Kursk region, in the October special school grounds — a boarding school for orphans the power engineers of Kurskenergo together with representatives of public organizations «Opora Russia» and Voluntary Association for Assistance to Army, Aviation and Fleet laid out a new avenue of conifers. It will be a great addition to the renovated orphanage, on the territory of which there is a large-scale reconstruction under way. «The new alley of power engineers is a gift for years to come. I saw with what will and warmth the employees of Kurskenergo were planting every tree,» underlined the October special school director Nina Usova. 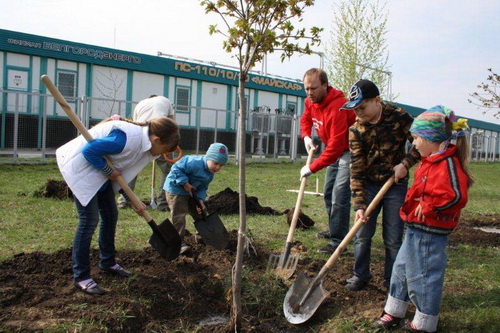 In the Kostroma region the campaign of the power engineers was joined by specialists of EMERCOM. New trees were planted in the Alley of Friendship, located along the Museum of the Romanovs in the Park of the Hall of the Nobility. This complex was built 100 years ago by Nickolay II in honour of the 300th anniversary of the Romanovs dynasty. With the new joint action the power engineers and rescue workers marked the 100th anniversary of the Museum, which will be celebrated in the city on May 18. In addition, with the support of the Governor of the Kostroma region Sergey Sitnikov the laying of the avenue of power engineers at the Regional Philharmonic at the entrance to Kostroma continued. Totally the employees of Kostromaenergo in a single day planted over 760 trees.

Municipal authorities have joined the campaign «Save the energy of the forest» in the Lipetsk region. Due to environmental «assault force» in Zadonsky, Dolgorukovsky and Dankovsky districts turned new green alleys appeared. In Zadonsk the alley of power engineers was laid out at a monument at the entrance to the city, in Dankov — in the Pioneers’ Park. In Dolgorukovo the alley planted by power engineers became an ornament of the recreation area at the entrance to the settlement. In total IDGC of Centre — Lipetskenergo division presented 600 new trees to people of the region, including ash, linden, red oak, white acacia, juniper, Lombardy poplars, willows, maples and lilacs. 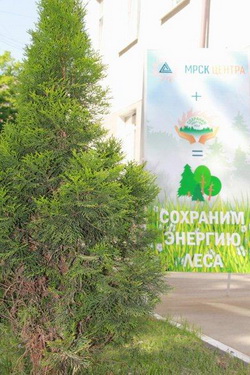 In Voronezh the power engineers planted trees near Tannery cordon, which was badly damaged during a fire in the summer of 2010. At the site of the burned forest hundreds of spruce and birch trees were planted. On one of the main streets of the district centre of Anna, thanks to the efforts of specialists of Anninsky Distribution Zone of Voronezhenrego, a catalpa alley was laid out — flowering decorative trees. The power engineers planted 50 seedlings of rare for the Voronezh region trees along the memorial to the Great Patriotic War.

In the Yaroslavl and Orel regions 500 new cherry trees, hazel, linden, arborvitae and juniper appeared. The campaign in IDGC of Centre — Orelenergo division was attended by all members of the staff and management of all 24 Distribution Zones.

In the Bryansk region the campaign «Save the energy of the forest» was held in parallel with the action «Energy of Victory». Thanks to this new avenues of Memory were laid out.

In the village of Golubeya of Dubrovsky district, where is there is a war memorial in honour of soldiers who defended the Bryansk region in  staff of Dubrovsky Distribution Zone, representatives of the Youth Council, veterans of Bryanskenergo planted ash, birch and spruce trees. In honour of the founder of the legendary weapons — the Kalashnikov assault rifle — Mikhail T. Kalashnikov near school # 1 in the city of Trubchevsk an alley of arborvitae was laid out. It was here, during the war, the evacuation hospital was located, which M. Kalashnikov was sent to after being injured during a tank battle of Trubchevsk.

The action «Save the energy of the forest» will continue tomorrow, May 18, on the All-Russian Day of forest planting. In the Tver region not the first year the action has been taking place in conjunction with the Regional Administration and the Department of Forestry. The power engineers also plan to green the area of the Children’s sanatorium tuberculosis hospital. 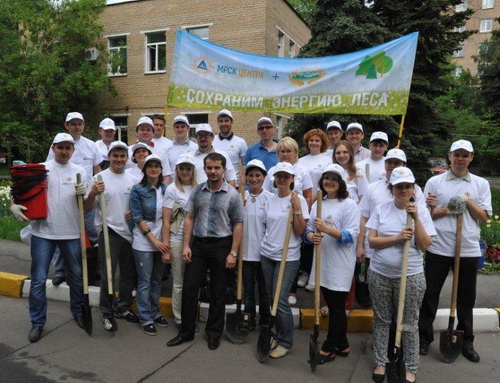