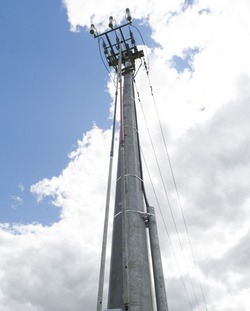 Reconstruction and modernization of the 110 kV overhead power lines «Zavolzhskaya 1,2» in the city of Kostroma is the largest investment project of IDGC of Centre. Its implementation will significantly increase the transmission capacity, improve the reliability of electricity supply to consumers of the most part of the city of Kostroma and the Kostroma region.

The first stage of the project involves the reconstruction of taps that connect the two lines with the most important city 110 kV substations «North» and «Central». On the sections wire will be fully replaced with a larger cross section one and they will be equipped with modern multi-faceted poles, designed for a large mechanical load.

The length of each tap is more than 2 km, the lines are in the central part of the city of Kostroma. Dense buildings and architectural plan of the regional centre does not allow to geographically move the power lines. Therefore, a traditional reconstruction project, according to which power engineers construct a new power line next to the existing one, and then remove the old poles, had to be rejected. At the request of city officials, the power lines should stay in the same place, and the poles to be located exactly in their place. Moreover, the reconstruction should not be performed with interruptions of power supply to consumers.

To address these issues, experts were forced to find completely new, innovative technical approaches. Three options were developed, two of which envisaged laying cable lines: permanent and temporary. The third project involved the construction of a temporary bypass overhead line of 110 kV to feed the tap substations for the period of modernization of the main overhead line. During a more detailed technical and economic comparison the «cable» options were «rejected» as they would have resulted in some significant cost of the project. In addition, when laying the cables there would be inevitably difficulties when crossing the underground utilities and a railroad track. 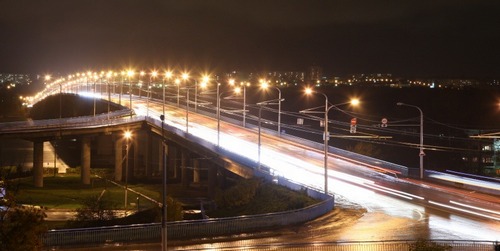 Thus, the third project was voted the best according to which the power engineers will construct two single-circuit 110 kV taps from the overhead lines «Zavolzhskaya 1,2» to the substations «North» and «Central». With them the two substations will be fed for the period of removal of the main lines and the construction of new ones in their location. As part of the work 28 multi-faceted metal poles will replace the old lattice ones on both lines. In order to reduce costs with the commissioning of new lines the temporary poles will be removed and used to reconstruct the main line of the 110kV overhead line «Zavolzhskaya 1,2».

According to the schedule the work will start in April 2013.