Chaired by General Director of IDGC of Centre Dmitry Gudzhoyan a production meeting of the managers of the Company was held in Tver. Directors of branches of IDGC of Center, deputies and heads in the main areas of activity summed up the Company’s operation in 2011 and outlined the prospects of development of the electric grid for 2012.

The central topic of the meeting was to discuss the operation results of the autumn-winter period 2011/12. It was noted that the Company operated at maximum load successfully. IDGC of Centre prepared for the autumn-winter period 2011/12 qualitatively, which included 2714 technical and organizational measures. The timely and proper execution of the repair program played an important role in the preparation and operation through the autumn-winter period. The funding for this program in 2011 amounted to more than 1.3 billion rubles. More than 5,000 transformer substations and switchgear, more than 20 thousand kilometers of power lines of different voltage classes were repaired. As part of the target reliability program isolating switches and short-circuiting switches were replaced at 300 substations, obsolete circuit breakers were replaced for a new generation of switches and relay protection. The activity on ROW clearing and expansion was performed in full and on time.

The commissioned after the reconstruction three 110/10 kV and 110/6 kV substations also significantly influenced the operation through the autumn-winter period 2011/12. They are the “East” substation in Kostromaenergo, “Belgorod” and “Chemical Plant” in Belgorod branch of the Company.

The managers of IDGC of Centre also discussed the key issues for the core business of selling services and technological connection, implementation of its innovation policy, objectives in the field of capital construction in 2012. The meeting touched upon the items on expansion of the range of additional services, reengineering and transport policy, economic and financial issues of the Company. A series of measures was outlined to implement the 2012 investment program, new approaches were developed to improve the quality of investment activities planning in terms of the number of technological connections and amount of power grid equipment renovation. Particular attention was paid to the innovative development program for in which the development of the youth centers of innovation was planned, checking possibilities for attracting private Russian and foreign investments for joint projects.

The priority activities in the field of information technology in IDGC of Centre this year is to work on installation of equipment to modernize the system of collection and transfer of information and improve the supervisory control system in the branches.

The stable and successful operation through the autumn-winter period was due to the quality and timely preparation for it, so the Company’s most important task for 2012 is the implementation of maintenance and investment programs to prepare for the coming peak loads. 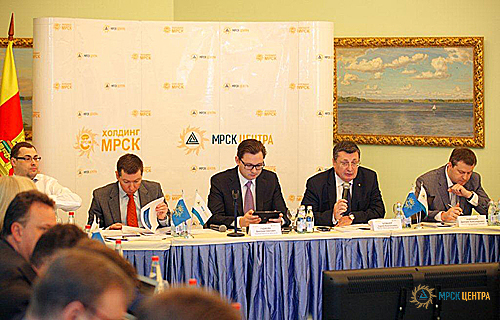