A production meeting of the management of IDGC of Centre under the chairmanship of General Director Dmitry Gudzhoyan was held in Lipetsk. The event was attended by Directors of the Company’s branches, Deputies in the main areas of activities.

The central topics of the meeting was the outcome of the preparation for the autumn-winter period (AWP), the tasks for 2012 in the field of capital construction projects, expanding the range of additional services, reengineering and strengthening control over the technological connection process, tariff regulation for as well as work in the field of innovations of the Company.

It was noted that IDGC of Centre had successfully carried out the preparations for the 2011/12 autumn-winter period, including 2 714 technical and organizational measures. Until the end of the year the power engineers will complete the repair and investment programs, ensure strict control over spending the emergency stock and its replenishment and continue making mobile emergency and repair crews.

According to Dmitry Gudzhoyan, a key objective of the Company in 2012 is to increase its operating efficiency. This is due to increasing demands for reliable electricity, creating a culture of consumption and tariff decisions for 2012. To accomplish this task a number of measures has been set up: improving business planning processes, IT-company structure and budget management, development of new approaches to the implementation of procurement procedures.

So, in 2012 the number of ad hoc and unplanned purchases, as well as purchases from a single source will be reduced and the procurement business process will be automated based on SAP platform.

In order to improve the control over performance of investment programs IDGC of Centre is planning to establish a dedicated web portal. With its help on-line control over construction schedules will be performed, photographic images will be taken and video monitoring of stages of the work status of priority projects and automation of management accounting will be performed.

In 2012, IDGC of Centre will automate its capital construction projects management system so that it will improve the quality of planning and reporting. Important tasks for the next year in capital construction will be the development of the market of contractors, the improvement of the legal work on the assignment of lands and obtaining building permits.

In the framework of implementation of the Program of Energy Saving and Energy Efficiency of IDGC of Centre for the measures to identify non-metered and non-contracted consumption were recognized as the most effective. The effect of these measures for 9 months 2011 totaled 144 million kW/h against the plan at 89 million kW/h. Their implementation will continue into next year.

In the course of the production meeting the issues of reforming the IT infrastructure, which should ensure the annual cost savings for IDGC of Center up to 10%, of JSC “Energy Service Company” development (100% subsidiary of IDGC of Centre) and the implementation of “last mile” agreements in  were also touched upon. 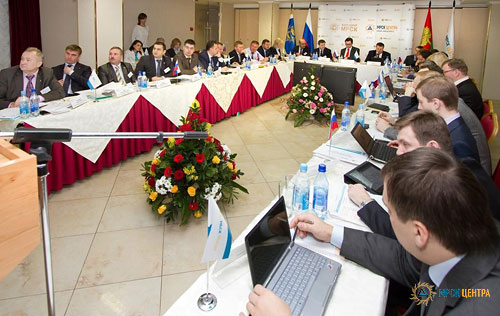