The company vehicles of IDGC of Centre — Yarenergo division have been completely equipped with the GLONASS/GPS monitoring and control of vehicles «AutoTracker» system. The equipment of the company’s divisions with modern monitoring system of vehicles is a major part of work aimed at optimizing the operation of motor vehicles, fast response to emergency situations.

The GLONASS/GPS monitoring and control of vehicles «AutoTracker» system allows visually tracking the location and movement of all vehicles of the division on the electronic map, recording the daily mileage, the route and fuel consumption. In the cabin of the vehicle there is a button with which the driver can send a signal about faults in the car or other emergency situations.

Special equipment has been installed in 476 vehicles, including lift trucks, crew vehicles, tractors, trucks, mobile electrical laboratory and other vehicles. Other 18 sets will be installed onto the vehicles being purchased. In each of the eighteen districts of electrical networks of Yarenergo division the work of the vehicles is monitored by the designated technical staff that monitors the implementation of the schedule and route of movement and quickly responds to signals from the crew. For this purpose the monitoring system can generate standard and custom reports, present a complete picture of vehicles use in the business units and division in general.

Thanks to the modern system of vehicles monitoring the cost of operating the fleet reduces and the arrival time of crews to the work place gets shorter. This eventually leads to higher quality and reliability of electricity supply.

IDGC of Centre has planned to create a geographically distributed system with 389 workplaces, which consists of the main control centre (Belgorod) and ten regional control centres located in divisions of the company. By now the system has been put into trial operation in four divisions of the company, and in other divisions the work is planned to be complete by the end of September 2011. 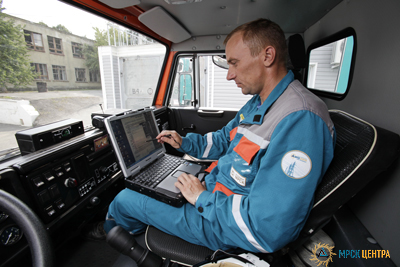