Specialists of the Sharyinsky Distribution Zone carry out large-scale work on modernization of street lighting systems in the city of Sharya as part of a program based on initiatives of residents. According to the concluded municipal contract with the administration of the city of Sharya, by 1 August, 466 lighting fixtures will be installed on 70 streets of four local councils - “Raduzhny”, “Parkovy”, “Aviation”, “Oktyabrsky”, and 14.5 km of wire will be replaced with self-supporting insulated wire (SIW). The total amount of funds required for the implementation of the project is 4 million 975 thousand rubles (shares of regional and municipal budgets - 50% each).

The lack of street lighting in Sharya has always been particularly relevant. The active participation of local councils of Sharya in the regional program to support local initiatives helps resolve the issue. The project “Sharya City Street Lighting” became one of the winners in the nomination “Local Initiatives”. This is the second “energy” project of the local councils of Sharya, thanks to which there are gradually more and more illuminated streets in the city. The first large-scale project “Street lighting of the territory of the local council “Leninsky”, which received a grant in the nomination “Local Initiatives”, was implemented in 2018. Then in the settlement 525 standard lighting fixtures were replaced with energy-saving LED ones, the costs amounted to almost 2.5 million rubles.

To date, power engineers have completed more than 60% of the total scope of work. Fittings and wires were installed at the local council “Parkovy”. The first batch of lighting fixtures will be received this week. The work is finishing on the territory of the local council “Aviation”, this is the very centre of the city. Starting next week, we will start installing lighting fixtures on the territory of the local council “Raduzhny” and “Oktyabrsky”, noted Sergey Serov, the foreman of a crew for operation of distribution grids of the Sharyinsky Distribution Zone. In order to fulfill the contractual obligations under the agreement on time, the specialists work very intensively. The work is carried out in compliance with the required deadlines and using modern technical means. When carrying out the work, obsolete incandescent lamps and mercury lamps are replaced with modern LED ones. New lines will be constructed on previously unlit streets using self-supporting insulated wire (SIW) with increased safety features.

“The renewal of the lines is carried out as part of the regional strategy for the comprehensive modernization of lighting networks, designed to reduce electricity consumption, improve the illumination of settlements, and most importantly, make the lives of residents more comfortable and safer,” stressed Dmitry Kolesnikov, the chief of the Sharyinsky Distribution Zone. 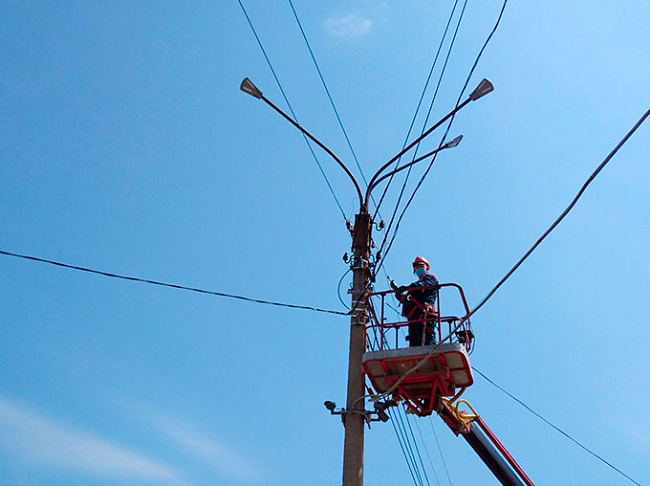