General Director of IDGC of Centre - the managing organization of IDGC of Centre and Volga Region (the companies operate under the brands of Rosseti Centre and Rosseti Centre and Volga Region) Igor Makovskiy received a letter of appreciation from the head of the Kozlovsky settlement of the Spirovsky district in the Tver region Alexander Zinkin. The head of the municipality thanks the head of the energy companies for the professional work of their specialists in the aftermath of the hurricane that took place in the Tver region in late October, as well as for helping to ensure backup energy supply to the Kozlovsky district hospital.

Please, be reminded that on the night of 28 October, a multicentre cyclone with gusts of wind up to 30 m/s caused a power outage in several districts of the Tver region.

The power engineers reacted to the situation and began emergency response operations immediately. Igor Makovskiy quickly arrived in the Tver region to personally participate in the management of the elimination of consequences of the disaster. The head of the company worked continuously in the Lesnoy, Sonkovsky, Maksatikhinsky, Vyzhnevolotsky, Spirovsky and other districts of the north-eastern part of the region, where the most difficult situation developed. At the same time, he not only supervised the emergency recovery work, but also took a direct part in it.

In the Spirovsky district, the head of Rosseti Centre, together with crews, restored power supply to the 35 kV overhead line “Tolmachi-Kozlovo”. In addition, Igor Makovskiy personally controlled the supply of electricity and the connection of each of the ten feeders at the 35 kV substation “Kozlovo”.

Expressing the gratitude to the head of the company, the head of the Kozlovsky rural settlement Alexander Zinkin noted: “The high efficiency in resolving the work issues and the professionalism of the staff made a good impression in the process of work.” 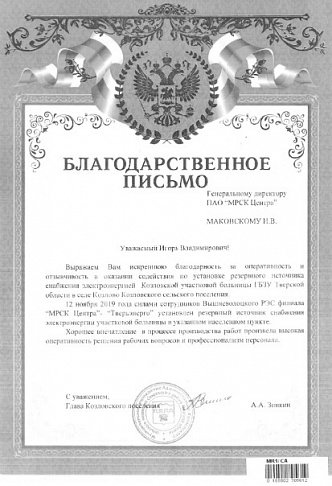