Tver power engineers of IDGC of Centre are for electrical safety

Power engineers of IDGC of Centre — Tverenergo division had lessons of electrical safety for students of Bezhetskaya and Emmausskaya boarding schools and Tver gymnasium # 6.

In an accessible and interesting way the personnel of technical and industrial control and safety Office explained the rules of behavior near power facilities, spoke about the hazards of electric current, demonstrated with illustrative examples of the seriousness of risk of penetration into the substations and other power facilities. Power engineers focused the attention of the children on how to properly handle electric appliances, outlets and switches in the home.

The students showed their particular interest to the master classes to help an injured person with electric shock, where the training simulator Gosha was made as the victim. After explanations of the energy specialists children with a passion had a competition to “revitalize” the dummy. The spirit of competition did not stop to learn and work out in practice the basic skills to rescue the man.

To promote the interest of children for learning the specialists of IDGC of Centre brought bright kids notebooks and pens, as well as educational games and computer games and globes. In memory of the event held the power engineers gave the children timetables, which will serve as a colorful reminder of the simple truth: electricity — is not only a friend but also a potential danger.

Director of Bezhetskaya boarding school Elena Pakkanen on behalf of the school administration thanked Deputy General Director of IDGC of Centre-Tverenergo division director Alexander Eyst for holding such an important event, as well as support for orphans. 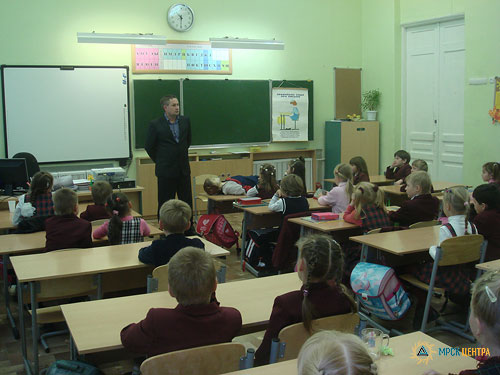