Head of Technical Inspection Department of IDGC of Centre Oleg Rochagov handed over to Deputy General Director of IDGC of Centre-Kurskenergo division director Alexander Pilyugin the Certificate of readiness of the division to work in the coming autumn and winter period (AWP).

This event was preceded by a comprehensive preparation of the division to work during the period of low temperatures and regular monitoring of energy facilities by the committee consisting of experts of Technical Inspection Department of IDGC of Centre, Upper — Don RTN Office, a subsidiary of SO UPS Kursk TCC and General Directorate of EMERCOM in the Kursk region.

Preliminarily the Certificates of readiness for the autumn-winter period were given to Districts of Electrical Networks, high-voltage grid Office, Grid Control Center and mechanization and vehicles Service of the division.

The hard work performed by the staff of Kurskenego in preparation for winter was noted by Deputy Chairman of the Utilities and Energy Committee of the Kursk region Nikolay Tretyakov. He expressed confidence in the successful going of Kurskenergo through the coming autumn-winter period.

In preparation for the AWP 163 activities have been executed, including implementation of integrated and overhaul repair plans, maintenance and operating maintenance of equipment, clearing and expansion of ROWs along power lines, preparation of vehicles, training and equipping with safety gear.

In preparation for the AWP the personnel conducted emergency response trainings to implement schedules for temporary outages, and training related to the peculiarities of preventing emergency situations at low temperatures. In preparation for the winter two joint trainings were conducted involving State Emergency Situations Ministry in the Kursk region, a branch of SO UPS Kursk TCC and the executive authorities to simulate the interaction in case of emergencies in conditions of low ambient air temperatures. 33 framework agreements were concluded with the municipal administrations and contractors on cooperation in carrying out rescue and recovery operations.

Head of Department of Civil Defense (CD) and prevention of emergency situations (ES) of General Directorate of Ministry of Emergency Situations of the Russian Federation in the Kursk region Alexander Lapin highly noted the readiness of rescue and recovery teams of Kurskenergo, their staffing, concerted actions of operators of the division with other agencies in emergency situations.

Emergency reserve of the division is staffed by 100%. Crews are equipped with electric and personal protective equipment, tools, appliances and clothing.

Large amount of work was performed under the repair and investment programs. A comprehensive overhaul of 22 substations of  high, medium and low voltage overhead lines (OPL), transformer substations with voltage class 10 kV was completed. More than 800 million rubles have been disbursed for construction and modernization of power facilities in the Kursk region in 2011. The reconstruction of a major supply substation of the regional center — 110/10 kV substation «Boiler» and outgoing conductor of 110 kV has helped to create a reserve of electric power in the amount outstripping the development of infrastructure of the regional center approximately for five years.

This year the modern substation 110/10 kV «Springs» has been commissioned in Kursk. Corresponding to the global technical standards the power facility has opened new opportunities for the development of the regional center. Among the major facilities of the investment program in 2011 is the reconstruction of the 110/6 kV substation «Greenhouse» — one of the master substations for electricity supply to consumers of Industrial district of the city of Kursk.

The implementation of the comprehensive plan to ensure electricity supply of facilities of the agro-industrial complex of Gorshechensky and Fatezhsky districts is under way, providing both the construction of new power lines and transformer substations, and upgrading of the existing substations in order to supply additional capacity.

IDGC of Centre-Kurskenergo division is implementing the target program to improve reliability aimed at replacing outdated equipment with new, more modern. This year a range of works at  substations has been performed. More than 60 small oil 10 kV switches were replaced for vacuum circuit breakers. To control the switches, the electromechanical protection of overhead power lines and substation equipment was replaced by modern microprocessors, allowing to locate quickly and isolate a fault, thereby reducing the period of interruption in energy supply and reduce the amount of electricity not supplied. More than 300 relay protection and automation devices are planned to be installed at substations «Zhukovka», «Zolotukhino», «Paniki» and «Studenok» and others by the end of the year.

Another important direction of the program is the replacement of oil switches for gas-insulated ones. During the summer months three gas-insulated circuit breakers of 110 kV was installed. One of them replaced the small oil WMT-110 kV circuit breaker at substation «Fiber», two were installed instead of 110 kV isolating switches at 110/35/10 kV Substation «Cozy». Also, to improve the reliability of substations operating current control devices were installed at two substations of Kurskenergo.

«Great work has been done, for which I would like to thank all the staff of Kurskenergo. We were able to improve the reliability of the supply centers to reduce the risks of outages, which will ensure stable operation of the electric grid of the Kursk region in the autumn-winter period», — said Deputy General Director of IDGC of Centre-Kurskenergo division Alexander Pilyugin. 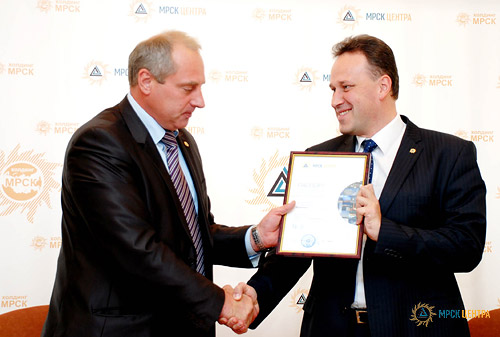