In the village of Kovylka of Kirsanov district of the Tambov region a memorial has been opened to soldiers who fell during the Great Patriotic War. The idea to build the monument belongs to the head of the Integrated Management Systems Branch IDGC of Centre — Tambovenergo division Alexander Abramov, the only son of the person in the village of Kovylka who is Full Cavalier of the Order of Glory, Mikhail Abramov.

Close attention is paid to the work to perpetuate the memory of soldiers of the Great Patriotic War in Tambovenergo. In the year of the 66th anniversary of Great Victory IDGC of Centre hosted Victory Banner Relay. The solemn ceremony was opened in Kovylka with the entry of the copy of the Victory Banner, which is kept in the museum of Tambovenergo. 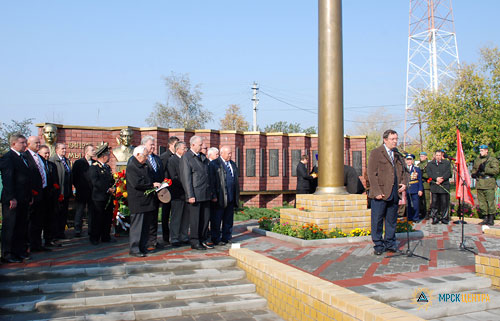 For employees of Kirsanovsky District of Electric Networks of the division the memorial in Kovylka has become truly native. During the whole time of erection of the memorial site the Tambov power engineers of IDGC of Center took an active part in all kinds of work. They landscaped the area adjacent to the monument. Within the campaign “Let’s save energy of forests” near the monument under construction at that time, seedlings were planted by members of the Youth Council of Tambovenergo and students of the Kovylsky secondary school.

It is no coincidence that at the opening ceremony of the memorial many words of gratitude were addressed to the employees of IDGC of Centre — Tambovenergo division. Letters of thanks signed by the Head of Administration of the Tambov region Oleg Betin were awarded to Deputy General Director — IDGC of Centre — Tambovenergo division director Vladimir Syschikov, Chief of Kirsanovsky District of Electric Networks of the division Nadezhda Kirillova and the inspirator of the construction of the monument Alexander Abramov.

As Alexander Abramov said, the idea of creating the memorial in Kovylka came long ago: “In the center of the village there must be a monument to those who perished during the war. This was implemented through the combined efforts of power engineers, government agencies, companies in the region and local residents. Only through our partnership such a monument was born. We built it almost two years exclusively for charitable funds. The vast majority of those who came in contact with our work, strongly supported this idea and made a contribution to the memorial”. Alexander Abramov is a veteran of the Armed Forces, a Knight of the Red Star, who distinguished himself during his military service in Afghanistan. As acknowledged by the speakers at the unveiling of the monument, his energy and desire to realize his aim in life was an example for all others. It was through his efforts it became a success to bring and lay at the foot of the memorial bulbs with the sacred earth from the battlefields from Tula, Astrakhan, Moscow and other cities-heroes.

“Our generation was lucky as we had a chance to speak to war veterans, who forged the great victory with their own hands. Our descendants should remember what was done by our parents and grandparents to save the peace on Earth, we will do everything possible to preserve the memory of their heroism ”- noted Deputy General Director of IDGC of Centre -Tambovenergo division director Vladimir Syschikov.

On the territory of the Tambov region memorials to soldiers-countrymen who died during World War II are being erected. Memorial in the village of Kovylka became the 44th monument in a row to the heroes of the Great Patriotic War. One of the main places in the composition of the memorial were taken by two busts — Hero of the Soviet Union Alexander Suvorov and Full Cavalier of the Order of Glory, Mikhail Abramov. The memorial was erected by the project of Honored architect of the RSFSR Alexander Kulikov. Sculptors Dmitry Basayev and Vitaly Yasenyuk became the authors of the busts of the heroes. The center of the architectural composition is the stele that is 14 meters and 18 centimeters in height — by the number of days of World War II.