Governor Alexey Gordeev presented state awards of the Russian Federation to the most distinguished citizens living in the Voronezh region. According to the Presidential Decree for the big contribution to the development of fuel-energy complex and long-term honest work the title of “Honored Power Engineer of the Russian Federation” was awarded to the operator of Borisoglebsky site of Operation Service of Grid Control Center of IDGC of Centre — Voronezhenergo division, Maria Tuchkova.

Maria Tuchkova graduated from Saratov Institute of Agricultural Mechanization after Kalinin under specialty “electrification”. Maria came to work at the division as an operations engineer in April 1983. However, the work was preceded by being a teacher, which later proved useful in the work at Voronezhenergo. During that time Maria had succeeded to prove herself as a true professional with invaluable experience.

Maria Tuchkova is an example of loyalty to her homeland and work for her colleagues and young professionals. It is proven by numerous awards, among them the honorary certificate of RAO “UES of Russia”, the honorary title of the Russian Ministry of Energy “Honored Power Engineer”, the honorary title “Honored Worker of the Unified Energy System of Russia” and the new title, received from the hands of the governor of the Voronezh region.

“The light and warmth in the homes of people, the work of the city’s enterprises — all of this is labor of power engineers. I am proud of my profession and enterprise, for which I have been working for many years. The task of senior professionals is to keep the level high and set an example to the young, helping to improve their professionalism,”- said Maria Tuchkova. 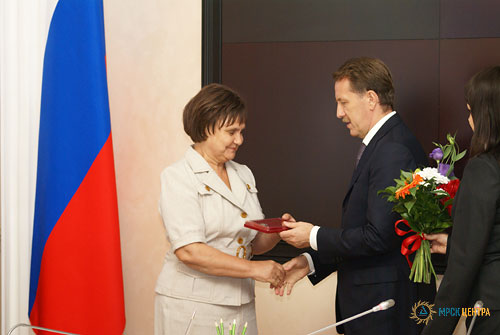