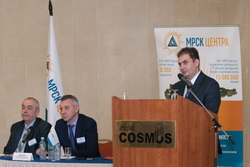 October 25 in Moscow the first meeting of the Consumer Council of IDGC of Centre was held. The event was attended by representatives of regional associations, large industrial consumers, small and medium-size businesses. During the meeting, the parties discussed issues of concern facing the grid company and customers and identified the priority initiatives to improve the legal framework.

In his welcoming speech, the Chairman of the Consumer Council of IDGC of Centre Vladimir Kazarin stressed: «The Consumer Council is an important channel of communication between the grid company and customers. Its main objective is to promote the efficient development of power grid facilities of the company in the interests of consumers.» Deputy General Director for Development and Sale of Services of IDGC of Centre Yulia Sharkova in her speech also stressed the importance of the close relationship with customers, as coming from them information will allow together to form some expert opinions and make proposals for the priority change of regulations.

During the meeting, participants also discussed the implementation of a set of measures by consumers on energy efficiency and energy conservation, development of mechanisms to regulate the relationship between garden associations and grid organizations in the implementation of grid connection.

The outcome of the meeting was the formation of proposals and recommendations on specific areas of IDGC of Centre’s activity. In order to explain to consumers their questions of interest concerning regulatory framework, it was decided to hold a series of meetings and round tables with the participation of representatives of the grid company.

«All the initiatives that have been put forward in the course of this meeting will be reflected in the final documents and will further be implemented in practice,» underlined in her closing speech, Deputy General Director for Development and Sale of Services of IDGC of Centre Yulia Sharkova.

In turn, the Chairman of the Consumer Council of IDGC of Centre Vladimir Kazarin stressed: «At the today’s meeting we have discussed in detail the tasks that we have to work together to solve. The company has demonstrated maximum openness and willingness to engage constructively.»