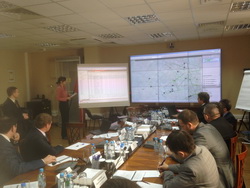 The DMS/OMS system provides operational and technological management of grids and is an effective management tool for emergency response. The system helps improve the reliability, reduce the time of power supply interruptions. Based on the simulation mode of power grids operation modes the DMS/OMS system allows to prevent the occurrence of failures when switching modes and optimize the grid operation in terms of losses and a given level of reliability. Also, it helps significantly optimize the performance of operators, offering a sequence of actions with the calculation of modes and impact assessment in specific situations. A pilot site for the implementation of the DMS/OMS system at IDGC of Centre was Belgorodenergo, a branch of the company, where the project has been implemented since 2010. Starting from 2012, the system is being implemented in all 11 branches.

During the meeting, experts of IDGC of Centre showed the participants the results of assessment and examples of the practical functioning of the DMS/OMS system, including — in the determination of fault location, isolation and power restoration at some operating equipment. The participants also learned the results of an expertise performed by JSC «NIIC MRSK» to examine the system, which resulted in the conclusion that it meets the functional requirements of the customer and may be approved for use in control centres of IDGC of Centre.

The company «Schneider Electric DMS NS» presented the capability of a new version of the DMS/OMS system, which significantly improved the user interface and enhanced integration with other information systems.

In conclusion, the parties discussed issues of cooperation in the implementation of innovative projects.