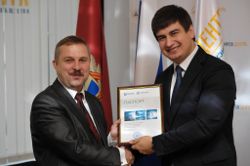 Certificate of readiness for the autumn — winter period 2013-2014 number one was given to IDGC of Centre — Bryanskenergo division. Thus, the branch has completed preparations for the work during the winter peak loads and successfully passed the inspections of the committee.

In preparation for successful operation of the branch through the autumn — winter peak loads in 2013-2014 Bryanskenergo took into account the experience of previous years. Summing up on the implementation of the repair program, Chief Engineer of the branch Alexander Kosarim noted that the plan was performed on all counts. In the current year, compared with the previous, the main indicators have been much improved. So, ROWs along power lines of all voltage classes were cleared in an area of 744.6 hectares, accounting for 105% of the planned amount for 9 months. In addition, the branch performed a comprehensive overhaul of five substations of 35-110 kV, eight transformers of 35-110 kV, 502 transformer substations, 55 oil circuit breakers of 35-110 kV, 1590 km of 0.4-10 kV overhead lines and 765 km of overhead lines of 35-110 kV. Means of supervisory control, relay protection and automation of buildings, structures and vehicles were also maintained.

In preparation for successful operation of the branch through the autumn — winter peak loads in 2013-2014 Bryanskenergo’s investment program for 2013 planned to expand ROWs in an area of 452.2 hectares. So, for the first 9 months of 2013 employees and contractors of the branch extended overhead lines in the area 420.15 hectares, or 106.9% of the planned amount. The plan to expand the ROWs along overhead power lines has been executed. Diagnostics of 3197 pieces of equipment, which is 94% of the annual plan, has been performed. Technical inspection of the facilities of electricity supply has been completed.

To ensure the power supply of social facilities Bryanskenergo acquired and placed in all Distribution Zones 61 mobile backup power supply sources of different capacity. To perform restoration operations the branch organized four crews of increased mobility, equipped with the necessary gear, tools, means of communication and packed meals. In addition to the increased mobility crews for restoration operations, in the structural units of the branch and in each administrative district 80 first responding and restoration crews were formed. IDGC of Centre — Bryanskenergo division at 100% has secured its emergency reserve.

As noted by Adviser to General Director, Acting Deputy General Director of IDGC of Centre — Bryanskenergo division director Roman Stefanov, «The certificate of readiness imposes obligations on the branch for uninterrupted supply of electricity during the period of low temperatures. The power engineers are conscious of their responsibility to consumers and confirm that the operation through the upcoming winter will be successful. The basis for this belief is the work done in the period of the preparation.»