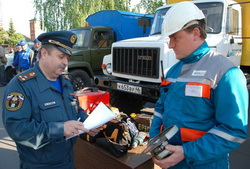 IDGC of Centre in preparation for the autumn- winter peak loads is completing a series of activities to train personnel and conduct emergency response trainings and joint exercises with structures that may be involved in the elimination of process failures during the winter.

«Qualification of operational and production personnel, the ability of specialists to work in a team, and their motivation are some of the most important components of safe operation and efficiency of the electric grid complex aftermath of technological failures,» underlines Deputy General Director — Chief Engineer of IDGC of Centre Sergey Shumakher.

To date, the exercises have been held in 5 branches of IDGC of Centre. Until the end of the month, the company plans to conduct 6 more such events. The main purpose of all training activities is to work out clear actions of operational staff of the branches in the elimination of process violations at low temperatures. In the course of such events coordination and clear communication with all of its participants is also practiced: the structural units of FGC UES, regional offices of EMERCOM of Russia, and local authorities.

In the Tver region trainings were based on the experience of the operation through the «freezing rain» in December 2010. According to the scenario, the exercises were held in conditions of abnormal weather conditions, north-eastern winds with gusts up to 20 m/s, temperature fluctuations in day and night from +2 to — 20 degrees, abundant precipitation in the form of freezing rain — more than 25,000 people in the region had no electricity. For an hour not only Tverenergo’s crews were brought into full readiness, but also emergency and rescue formations of various facilities and enterprises to clear roads of fallen trees, snow drifts and possible assistance to the power engineers. It involved forces and means of housing and public utilities, cities and rural settlements, and the fire department. Practical work was performed to connect independent power supply sources and to supply electricity to socially important facilities. 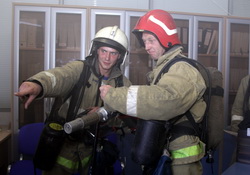 On the territory of the Smolensk region one of the most large-scale exercises was held, the course of which was supervised by JSC «Russian Grids» and the Ministry of Energy of the Russian Federation. According to the legend of the training at the Smolensk nuclear power plant units # 1 and 3 had a shutdown on protection tripping. In that case, six overhead power lines of 750 kV, 500 kV and 300 kV were de-energized. Due to the possibility of mass disturbances that limits energy consumption for a lot of consumers in the Central Federal District, Smolenskenergo introduced the high alert operation mode for emergency restoration and disaster management. Participants of the exercises demonstrated a high professional level — the conditional emergency situation in the regional power system was promptly eliminated.

In the Kursk region a joint emergency training was attended by specialists of IDGC of Centre — Kurskenergo division, Black Earth PMES of JSC «FGC UES», Kursk Electrical Distribution Zone, branch of OJSC «Quadra» — «Southern Generation». The training was aimed at checking personnel actions of the subjects of the power industry when a temporary outage schedule of consumption in the energy system of the Kursk region is in operation.

In the Lipetsk region exercises were held in all 13 Distribution Zones of Lipetskenergo. Special attention was paid to the order of alerts following the execution of the decree of the President of the Russian Federation on the establishment of an integrated system of emergency public warning about the threat of a disaster in the territories of municipalities. The exercise tested operational readiness of personnel of operational and technological service of the Grid Control Centre to work effectively with local authorities.

«Such exercises can establish constructive cooperation between all parties,» notes Sergey Shumakher. «The Company has a clear system of interaction with resource supplying enterprises, bodies of EMERCOM, regional heads in the event of an emergency. We face common challenges, and we must be prepared for any situations. Regardless of the vagaries of nature and extraordinary events our task is to ensure reliable power supply to consumers.»