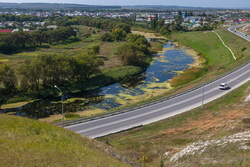 Representatives of IDGC of Centre shared with participants of the All-Russian Conference «Available grids: projects, experience, current issues» their experience of forming the program of grid connections and its synchronization with the main directions of economic development of the regions. The meeting is organized at the initiative of JSC «Russian Grids» to discuss concrete steps of electric grid companies to improve the availability of grid connection and the «Road Map» action plan implementation, approved by the Resolution of the Government of the Russian Federation dated 30 June 2012.

Representatives of Ministry of Economic Development, the Federal Antimonopoly Service, administrations of the subjects of the Russian Federation participated in the plenary session and round tables along with specialists from Russian Grids. The experts reviewed the legal framework to simplify the grid connection procedure by power distribution, estimated investment attractiveness of regions and learned the experience of some areas to implement grid connection programs.

One of the fastest growing regions in the service area of IDGC of Centre is the Belgorod region.

«Since 2006, the region has had a steady increase in grid connections,» clarified Deputy Director for Development and Sale of Services of IDGC of Centre — Belgorodenergo division Roman Borodin. «Each year, about 10 thousand customers are connected to the grid, with the most part of who are individual developers.»

Citizens are motivated to construct their own houses with the regional program of infrastructure construction for mass housing estates, which determines the mode of financing and the timing of provision of the individual housing estates with engineering infrastructure. To connect multiple neighbourhoods from 2006 to 2012 IDGC of Centre — Belgorodenergo division has constructed about 2000 km of power lines and commissioned more than 90 MVA transformer capacity. Only this year, Belgorodenergo will spend more than 560 million rubles on the construction of electric grids in individual housing development neighbourhoods. Possibility of connection will be created for 4005 sites. «Land plots for the individual construction are given to residents of the region on preferential terms,» explained, speaking at a round table, the chairman of the Commission on the state regulation of prices and tariffs in the Belgorod region Gennady Bondarev. «Quick provision of the necessary grid infrastructure encourages citizens to build their own homes.»

Gennady Bondarev noted that the easy grid connection, the possibility and timing of energizing commissioned and reconstructed facilities play the decisive role in the economic development of the Belgorod region. In the formation of the program of grid connections several government departments are involved, recommending the inclusion of certain particularly important, large and economically important facilities. The final list is developed by taking into account the long-term dynamics of growth of rates and sources of funding approved by the decision of the regional government.

When determining where to place enterprises and agricultural complexes the regional authorities take into account the observed in the region steady growth of electricity consumption, so the construction is planned as much as possible where there is no shortage of power. Belgorodenergo, on its part, constantly works to reduce the amount of unavailable power supply centres. Reconstruction of substations with the replacement of power transformers with new transformers of higher capacity, moving transformers from one substation to another, taking into account the existing load, has allowed from 2006 to 2012 to make 15 power supply centres available, only 8 remain unavailable. Regarding the timing of grid connection, then, according to representatives of the region, they depend not only on the effective implementation of the stages of design and construction of electrical grids, but also on the applicant’s compliance with terms of designing and building their own internal networks, as well as the qualitative determination of the value of customer contract demand.